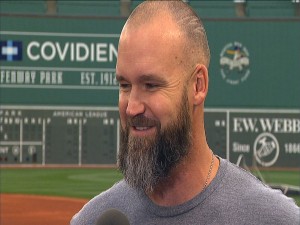 Great interview with David Ross in the Bangor Daily News (that’s in Maine, folks). Of course I ignored all the baseball questions and went for the important stuff:

The Red Sox grew beards as a sign of unity and he admitted that he hated his.

“It was a skunk nest,” said Ross. “I had to put conditioner in it and blow-dry it.”

He said the Red Sox will miss center fielder Jacoby Ellsbury, who signed with the Yankees, but added, “I’m going to enjoy throwing him out.”

When relief pitcher Koji Uehara jumped into his arms after the game-ending strikeout in Game 6 of the World Series, he observed “he was light as a feather. I could have thrown him into the Budweiser sign.”

He was glad he caught the final pitch “because I didn’t want to have to run all that way from the dugout to the [celebratory] pile.”

He called Dustin Pedroia a “bearded gnome” and said Mike Napoli’s beard had a “life of its own. It was a beard with a human attached to it.”

Quality stuff, right? Looking forward to more of his quotes this year.