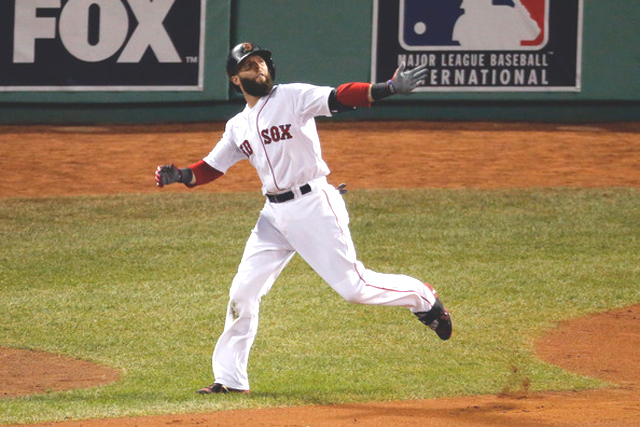 First things first: When it comes to the Red Sox, I can never escape the feeling of impeding collapse.

Blame it on the teams of my youth. I was raised on the Red Sox of the 80s and 90s. Teams that rarely sniffed any postseason action, and when they did, they crushed my heart to powder. Their one visit to the World Series in the days of my youth, the infamous 1986 contest against the Mets, ended with me collapsed on the floor, unable and unwilling to move for hours.

After that, and through 1999, the Sox made the playoffs five times, racking up an unspectacular 2-18 record, and surviving the first round only once. The 2003 ALCS only further convinced me that the for the Red Sox, a world championship would forever be as elusive as Nancy Wilson driving past Judge Reinhold in Fast Times at Ridgemont High.

Then 2004 happened. And it should have changed me. But it didn’t.

Then 2007 happened. And even as that world-beater team finished first in the AL east and stomped the Rockies in four straight, I kept waiting for the wheels to fall off the wagon.

By all accounts, 2013 should have finally turned me. This was a team that, looking back, seemed almost pre-ordained to win the World Series. A scruffy, bearded phoenix rising from the ashes of the USS Valentine and restoring hope and pride to a city that had been kneecapped.

But it didn’t. At least not at first. Hell, as Victorino stepped to the plate with the bases loaded in game five of the ALCS, I tweeted that I’d rather see the struggling Stephen Drew in this situation than the Flyin’ Hawaiian.

You know how that one ended. And even as the team rolled into the World Series, having defeated David Price and Max Scherzer and Justin Verlander–each of whom was loudly declared to be “the one guy you don’t want to be facing in the postseason”–I couldn’t let down my guard. Couldn’t shake the images of the Yankees, A’s and Mets bustin’ celebratory moves on our graves.

At least not until Dustin Pedroia stepped to the plate in the first inning of game six of the World Series. And cracked what turned out to be a foul ball, despite The Elf putting his best Fisk on it.

To that point, all I knew was that Michael Wacha was an Unstoppable Force in the postseason. That he was the Cards’ best chance of ensuring a game seven. And that anything could happen in a game seven. I also thought about our last showing against Wacha in game two. And our paltry three hits over six innings. Granted, one of them was a two-run Papi homer. But still. No matter how much Shane Victorino wanted to assure me that everything’s gonna be alright, I wasn’t buying. Not yet. Not until the final out.

Once Pedroia connected for that towering foul, however, I felt oddly comfortable. Watching that pitch leap out of the yard just two batters in, I could finally wrap my head around the idea that we weren’t going to struggle to get wood on ball. That Aaron Boone and Mookie Wilson and David Stewart weren’t walking through that door. And that maybe, just maybe, we were in store for out third fairytale season in ten years.

Just 3.2 innings later, Wacha was chased from the game. And the Sox were up by six.

I can’t change the way I’ve been wired. But I only need to be wedgied by foreshadowing so many times before I finally give in and accept it. I’m sorry it took me to the last game of the 2013 season to realize it. But I thank Dustin Pedroia and that remarkable foul ball for finally showing me the light.