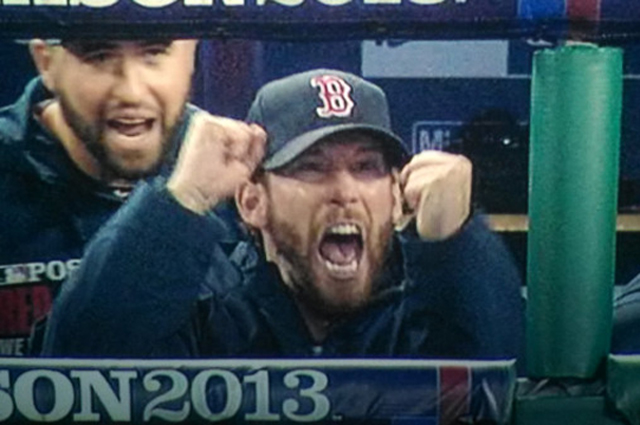 Coming into this series, the FOX announcers made sure we knew one thing: THAT JUSTIN VERLANDER IS AN UNSTOPPABLE FORCE OF NATURE.

Seriously. You DO NOT WANT TO FACE THIS GUY IN THE ALCS. AND THE TIGERS ARE GOING TO THROW HIM AT YOU TWICE! TWICE!

Even as the Sox turned in some late night fireworks on Sunday to turn the tide of game two, all we heard about was VERLANDER WAITING IN THE WINGS.

Well, Verlander came as advertised. He stuffed us but good. Until that part where Mike Napoli, who I predicted would come alive like Frampton in the ALCS, took him yard.

Meanwhile, while all eyes were on Verlander, the Tigers were victims of a LACKATTACK. John Motherf#$king Lackey came, saw and conquered and didn’t blink once as he whiffed 8 Tigers and gave up no runs before handing things over the Craig Breslow in the seventh.

Yes, things got itchy in the eighth when Detroit got runners on first and third with one out, but Tazawa struck out he mighty Miggy, then gave way to Koji who K’ed Fielder. In the ninth, after the lead runner got on, Koji got a key double play ball before striking out Avila. And just like that, we’re up 2-1.

It was a harrowing, ultimately exhilarating game. And Lackey was a f#$king beast, putting in a performance that no one could have seen coming.

Now, if nothing else, we have a better chance of bringing this back to Boston, assuming the Tigers can recover to grab at least one win at Comerica.

So much awesome. What a f#$king game.

Next post The Adventures of Ellsbury 'n' Elf: All Verlander, All the Time