Red Sox Beat Giants; My Faith in the Baseball Food Chain is Restored 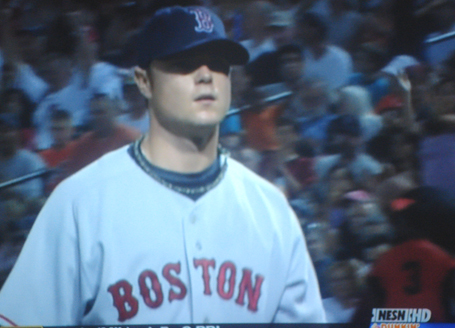 All you need to know about last night’s game is that Will Middlebrooks was intentionally walked not once but twice.

In fact, if you slept through the game and woke up unaware of the score, you’d only need to be told that Will Middlebrooks was intentionally walked by a major league pitcher two times and you’d probably be able to figure how things turned out.

I don’t care that the intentional passes were issued so Tim Lincecum could get to Jon Lester. In my mind, San Fran so feared the Red Sox’ stacked line-up that nobody wanted to face “The Wrath of Will.”

WILLMANIA is an important part of THE THRILL OF INTERLEAGUE PLAY. And those of us who stayed up until the bitter end were rewarded with AN ADRENALINE-CHARGED VICTORY.

Anyway, a great performance from Lester, who went 8 and 1/3 innings and gave up no runs. Meanwhile, Victorino–rapidly becoming this team’s most valued “secret weapon”–and Nava each had three hits and contributed mightily to Runs-a-palooza.

Yes, it was against one of MLB’s worst teams. But that’s how it’s supposed to be, man. We’ve got to fatten up on these guys before heading out to Crawfordville.

Previous post What the F$%k is Going On With the Red Sox?