From The “You can’t make this shit up” Files 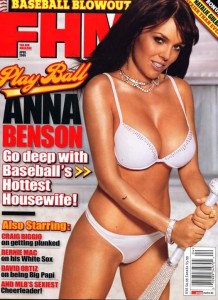 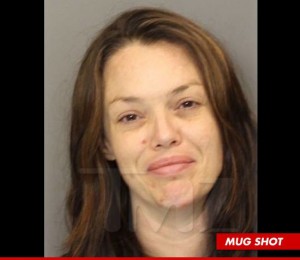 Yeah, that’s her actual mugshot after she ambushed her soon-to-be ex-husband at his house. No sexy negligee for the 2013 Anna Benson, no sir, she was rocking a bulletproof vest and heavily armed. From the New York Post:

Crazed “Baseball Wife” Anna Benson dressed like a ninja and armed herself with a gun, ammo and bullet-proof vest to break into the home of estranged hubby and ex-Mets pitcher Kris Benson, demanding dough and calling him a “p—y,’’ a police report shows.

The former Playboy Playmate and mom of four, 37, ambushed her stunned husband, 38, Sunday night as he exited the bathroom in the master bedroom of the home they once shared in Marietta, Ga., the document says.

She also had on her a black Taurus handgun and red “Batman” folding knife, authorities said.

We remember the calmer, gentler Anna Benson, who once told reporters if her husband Kris ever cheated on her, she would get her revenge by sleeping with the entire Mets team. Hard to believe these two kids couldn’t keep it together.
Tags: anna bensonarrestRed Sox

Previous post There's a feeling I get, when I look to the west