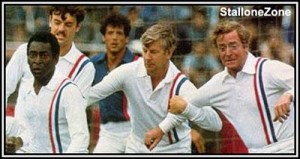 Yeah, when I think “victory” I think of Michael Caine. Or not. Last night/this morning, there were plenty of heroes. Big Papi took the cape off for one game and graciously let the likes of Victorino, Salty and Morales play the role. An ugly win, but a huge win. These are the games we may look at in October and say “that’s when the 2013 Red Sox found their identity.”

John Lackey didn’t have his best stuff, but he gutted out five and two-thirds, and showed Matt Joyce he is not to be f**ked with. I never thought I’d write these words, but Lackster showed me something when he taught Joyce a little something about what not to do. It should come as a surprise to nobody that the benches cleared and that blistered anus named Luke Scott was in the middle of it.

At this point, I have no idea what I’m talking about. But the Sox got a big win and I got a late-night peek at the awesomeness of Jenny Dell. And I think I may have a crush on Salty. Don’t tell anyone.

Next post All's Well That Finally Ends. Plus, We Won.

Previous post You Cannot Stop David Ortiz. You Can Only Hope to Contain Him.