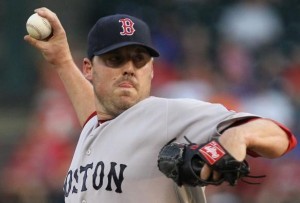 Prior to the season, Red boldly predicted that John Lackey would win 20 games. I, on the hand, predicted that Lackey would somehow lose games he wasn’t even pitching in. Those not part of the lunatic fringe knew it would be somewhere in between. With Clay possibly headed for the DL and Lester unable to throw strikes (despite my telepathic encouragement of “throw it over the white thing”), Lackey may be the key to the 2013 season.

Lackey struggled early, but unlike previous seasons in that situation, he settled down, went seven strong, and earned his fourth win of the season. Lackey has given up three runs or less in nine of his eleven starts so far. He will face perhaps his toughest test thus far in Detroit next week.

Meanwhile, the Bruins just scored in OT to tie the series 1-1.

Next post Felix Doubront is the Red Sox' Most Popular Pitcher