Felix Doubront is the Red Sox’ Most Popular Pitcher

Well, at least according to the numbers.

After crunching the numbers on more than 8,000 tickets sold to Fenway Park since the beginning of the 2013 season, Red Sox pitcher Felix Doubront commands the highest average price on the secondary ticket market with an average price of $67.

As you can see in the chart below, tickets for Boston Red Sox games when Doubront starts sell on Ticket Liquidator for an average of $67, $4 dollars higher than Clay Buchholz’s $63. Jon Lester ($58) has the next-highest average price, followed by Jon Lackey ($57), Ryan Dempster ($57) and Alfredo Aceves ($44). 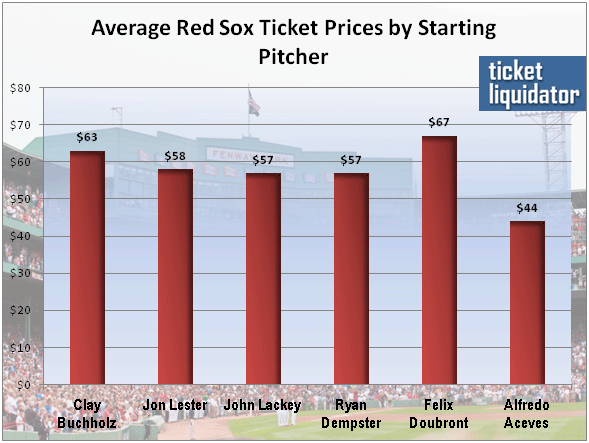 So does this mean Doubront is Red Sox Nation’s favorite pitcher?

While the starting pitcher does have an effect on the average price of baseball tickets on the secondary market, various other factors affect ticket prices as well. The day of the week as well as the opponent heavily factors into the “market value” of a Red Sox ticket on the secondary market. Market value denotes the price fans are willing to pay to get into the game*.

In the case of the 2013 Red Sox season, the higher price for Doubront starts is likely a reflection of the fact that Doubront took the mound on a weekend on three-quarters of his home starts. As you might expect, prices for Red Sox tickets (and MLB in general) are markedly higher on the weekends than during the week.

In order to get a better view of the effect the starting pitcher has on ticket prices, we went ahead and separated data into weekday games as well as games played on Friday, Saturday and Sunday. As you can see, all pitchers command a larger ticket price on the weekends. 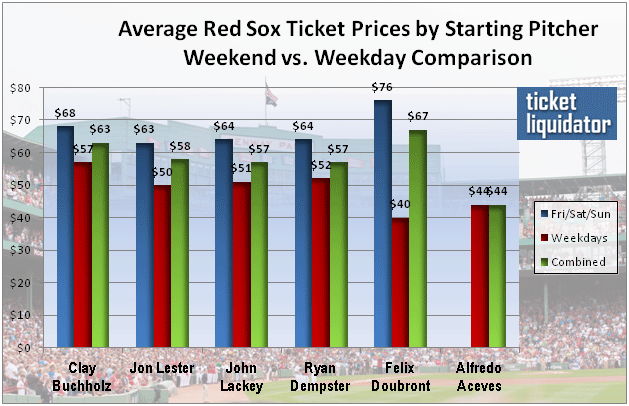 Keep in mind Clay Buchholz’s weekday numbers are somewhat inflated because he took the mound on Fenway’s Home Opener, when the average price for a ticket was $97, $69 more than they were for Fenway’s second game of the year, $28. If you factor out the home opener Buchholz’s home average for two weekday games is $36.5.

In contrast to Doubront, all four of Alfredo Aceves’ starts have come during the week, so that $44 average isn’t as bad as it seems. In fact during the week tickets for games Aceves started were actually $4 more expensive than Doubront.

The prices reflect ticket sales from Fenway’s Home Opener against the Baltimore Orioles on April 8 through the June 8th matchup against the Los Angeles Angels (of Anaheim) at Fenway. That’s three months and 40 games.

The other thing to keep in mind that is that the average price of Red Sox tickets has been steadily rising since the beginning of the season, when expectations from the fan-base were lower than Will Middlebrooks’s current batting average. 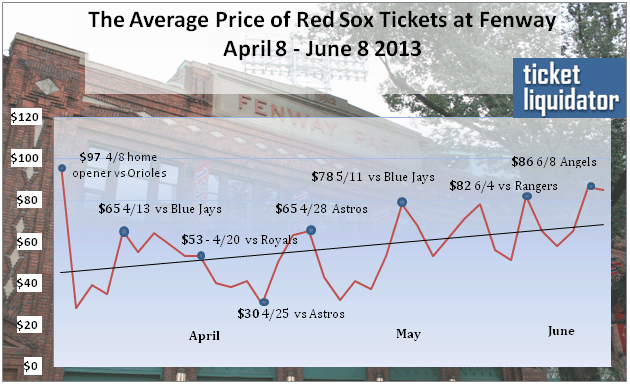 And we haven’t even seen the New York Yankees play at Fenway yet, those tickets are by far the most-expensive is Major League Baseball. The first Red Sox Yankees series at Fenway Park takes place from Friday, August 19 – Sunday, August 21. As of June 18, tickets for Friday’s game are averaging $134, Saturday is $146 and Sunday (an ESPN Sunday Night Baseball game) are at $96.

If Boston continues to lead the AL East (and the whole American League as of this writing) you can expect ticket prices to continue to climb, especially as the weather gets warmer. So if you are interested in getting out to Fenway Park, you might want to think about getting tickets now and save yourself a few bucks.

*So-called “Secondary Ticket Market” sites like Ticket Liquidator and StubHub rely on individual ticket owners from across the country to set ticket prices for the tickets they own and list for sale. For more information on the secondary market, you can watch the video Is Ticket Liquidator Legit?

About the Author: Andrés Hidalgo is an inbound marketer at Ticket Liquidator and contributor to Live Toast. You can follow him on Twitter at @andresjhidalgo.