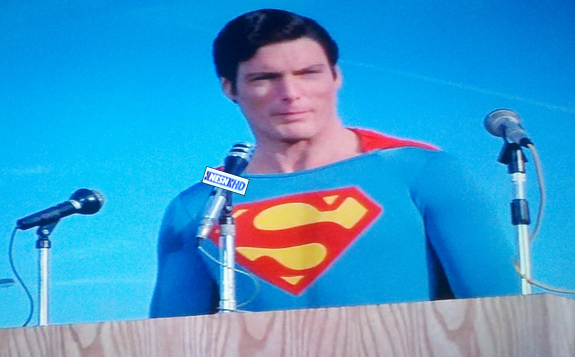 “Citizens of my adopted homeworld, it is with great pride and pleasure that I accept the mantle of Manager of the Boston Red Sox. I believe that this will prove the beginning of a truly magical era in Boston sports and this history of the Red Sox.

I speak for all of my constituents — including first base coach Eddie Van Halen, third base coach Scarlett Johansson, batting coach Erin Gray as Wilma Deering from ‘Buck Rogers in the Twenty-Fifth Century’ and the Pitching Coach Committee made up of Nolan Ryan, a robot and the Pussycat Dolls — in saying that we are ready to take on all comers in the American League East.

As I promised during the interview process — and I do thank John, Larry and Tom for coming out to the Fortress of Solitude over the last few weeks — I have secured David Ortiz’s services for the next twenty-four years. I have also brought Mark Bellhorn out of retirement and installed him as clubhouse assistant. Doug Mirabelli, Kevin Millar, Curt Leskanic and Derek Lowe have also been brought back for roles we are still hammering out, although they will likely involve alcohol and/or pornography.

To make up for last year’s shoddy performance, all patrons will be allowed free beer for the upcoming 2013 season. And my first official act as manager will be presiding over Bobby Valentine’s banishment to the Phantom Zone during the live broadcast of ‘Don Orsillo’s Pants-Free Christmas‘ coming to NESN this December.

Per my agreement with Major League Baseball, I will not be using my X-ray vision, tornado breath or heat-ray to illegally manipulate the outcome of any game. But, between us, if you see Derek Jeter cup his nuts and drop to the ground in agony during any upcoming series with the Yankees… I had nothing to do with it. Heh.

Next post Jason Bay Possibly Willing to Consider a Gig in Boston. Or at Arby's.