Jason Bay Possibly Willing to Consider a Gig in Boston. Or at Arby’s. 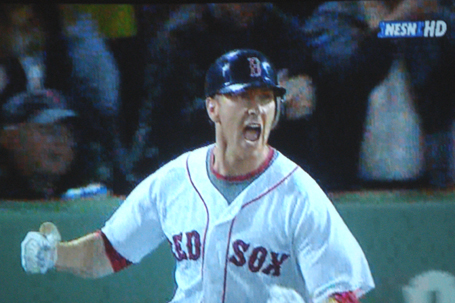 Talk about the passion.

The Mets and Jason Bay recently reached an agreement by which Bay could take the rest of his truckloads of cash if he’d simply get the f$%k out of their ballpark. That leaves JayBay gigless. And apparently willing to consider a role with any club he’s been with in the past, including, allegedly, Boston.

The best thing about this idea — outside of the fact that it would appease all of those people who, immediately upon Valentine’s firing, said, “Now if they can just get Jason Bay back, they’d be on to something” — is that it would give those newly-indoctrinated members of Red Sox Nation who may have missed Bay’s first run with us in 2008/2009 a chance to experience the magic. Like that time he got that hit and made us all think, “he’s kinda like a white Manny Ramirez.”

My vodka-soaked brain says this: if Bay would agree to baseball’s most incentive-laden contract (say, “go 10 at-bats without a hit and proceed directly to the local D’angelo’s”), he may be worth a shot, assuming everyone in the Red Sox front office is drunk the day Bay’s agent happens to call. Hey, if we didn’t take chances on the cast-offs, we might never have known Tim Wakefield.

But that money could be put to better use. Like luring Cesar Crespo out of retirement. Or Heidi Watney back to Boston. Or just give that shit to me and Denton and let us assemble some blow-out super band for the 2013 home opener. I’ve got John Parr’s number around here somewhere.