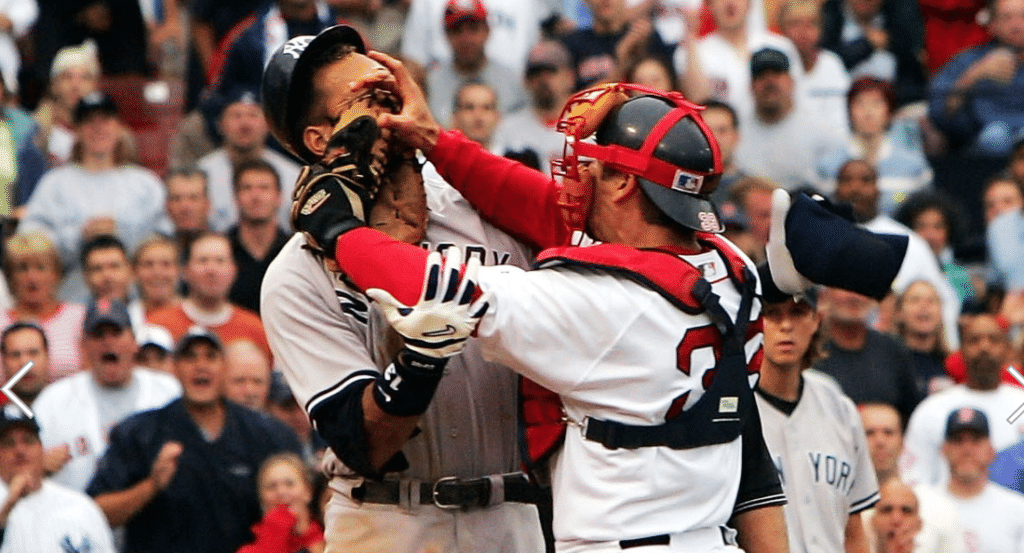 They’ve done it to me again.

Not even twenty-four hours after I’d packed away the puffy hand and Schilling jersey in disgust, they’ve got me back.

I’d sworn ’em off, like drugs, booze, and the films of Dan Aykroyd. But they’ve sucked me back in. By showing spirit, by showing tenacity, and by Jason Varitek making A-Rod eat glove.

Watching the brawl — which erupted after Rodriguez got plunked by Arroyo — I thought to myself, “Okay, THIS has got to get them fired up.” And it did. At least for an inning or two, where the Red Sox built a 4-3 lead. But then they slipped back into pre-fight mode: horrificly sloppy play, god-awful pitching (low-lighted by a brief stint by Leskanic in which I don’t think the guy threw a single pitch anywhere near the strike zone), and missed opportunities with the bases loaded. And before you know it, the Yanks are up 10-8.

But we kept! on! fighting! And when Mendoza was called upon to keep it close at 10-8, the guy delivered two hitless innings. And that set the stage for the game to end the way we’d always scripted it: with Mo Rivera giving up the walk-off, game-winning home run. Thank you, Bill Mueller!

Is this the spark? Will the Sox roll on from here to that much-wished-for 15-game win streak? Dude, this is baseball… and after today’s game, it’s safe to say anything can happen. But for one friggin’ spectacular afternoon, we got to see Mariano Rivera be the guy who watches helplessly as a pitch he’s just delivered sails beyond the bullpen wall. And it felt bloody good.

Some other notes on the day:

— How great would it be if Mendoza could come through and somehow be even one-eighth of the pitcher we thought we were getting over the last few months of the season. If effective, he could be invaluable, ‘specially with Williamson still on the shelf.

— In any good baseball brawl, you have your “main brawl” and your “satellite brawls” that branch off from the primary donnybrook. The best one from this fight: Tanyon Sturtze grabbing Kapler from behind and then getting grabbed himself by the behemoth that is Ortiz. The three then go tumbling, only to have Trot Nixon join the fray. For all his clean play and loquacious interviews, we knew that there was a brawler lurking beneath Kapler’s skin (cripes, he’s pretty much the only guy on the team who isn’t built like your high school gym teacher). And it was awesome to see it unleashed. Kapler was particularly animated after he got ejected and Sturtze, remarkably, remained in the game.

— Sunday night we get the “Fenway Punk” himself on the mound. Can’t hardly wait.