Lin Turning into Viable Option for Red Sox at Third Base 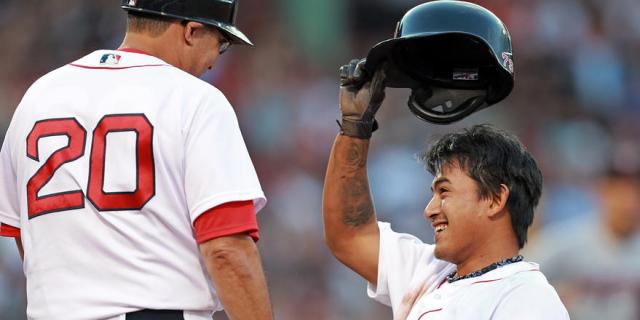 The Red Sox have been struggling scoring runs recently, but the team has been fortunate the New York Yankees have been slumping so they aren’t far behind their rivals who sit on top of the AL East. Despite their inability to score runs consistently, the Red Sox are still usually favored in most online odds for baseball games.

Tzu-Wei Lin, who recently got called up to the big leagues, spent the first five years of his career in Boston’s minor league system. Due to the injury to third baseman Pablo Sandoval, Lin was recently inserted in Boston’s lineup, and is trying to make the best of the opportunity.

Until now, Lin was considered a light bat that could hit singles, and was more regarded for his defensive skills and his ability to play third base, second base, and shortstop. At 23-years-old, the 5 foot 9 inch infielder is showing he can do more than play good defense.

In his first 605 at bats while he was in Double A Portland, Lin’s stat line was 213/.276/.280, with two homeruns. Even though the numbers were not mind blowing, they were decent for someone who isn’t a power hitter.

This year, things seem to change for Lin. In his first 184 at bats in Portland, he had a stat line of .302/.379/.491, with five homeruns, which caught the eye of Red Sox scouts. Lin also pulled the ball in 45.9 percent of his at bats, which was a career best. He also hit fly balls in 44.3 percent of his at bats, which is eight percent more than any other season he has as a pro.

While nobody believes Lin is the second coming of Brooks Robinson, there is no denying that he is hitting the ball much harder than he has at any point in his career. Lin’s hot bat and defensive skills now make him a very intriguing prospect for the Red Sox, who desperately need some consistency at the third base position.

After Monday’s 4-1 win, Lin told reporters through his translator that his fly ball rate had improved this season. He attributed the change in the rate to his aggressiveness at the plate this season as opposed to last season when he was just trying to put the ball in play.

Lin’s aggressiveness paid off on Monday as he got his first career MLB hit in his first at bat. The hit made Lin the eighth player born in Taiwan to get an MLB hit. Despite the hit, the team is more impressed by the way he played defense the last two games.

With Pablo Sandoval on the disabled list and expected to spend some time in Triple A before rejoining the team, Lin and Deven Marrero are the team’s only options at third base. With Marrero hitting .156 for the season, it seems likely that the Red Sox will use Lin more since he is just as good defensively and is also a better offensive player.

Lin told reporters he is just focusing on adjusting to third base and has spent some time working with infield coordinator Brian Butterfield because he has only played 19 games at third base since he joined the organization.