Remembering Dad, and His Love of the Red Sox, on Father’s Day 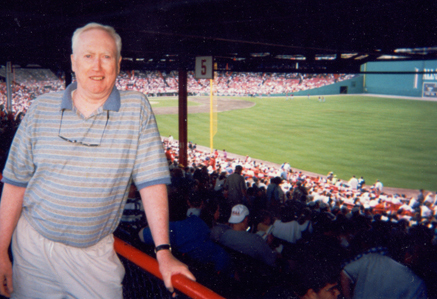 I wrote this back in 2011, five years after my dad passed. And I’ve re-posted it pretty much every year since then. I used to make updates to the Red Sox players I referenced, year over year, but I gave that up around 2014. Now I just let the piece stand as it is, but will never stop re-posting it on Father’s Day as a tribute to the man who took me to my first game and lived his life a die-hard Red Sox fan. And if you’re one of the few who actually re-reads this every year, thank you. Remember to raise a pint today for your Dad–those still with us and those long gone.

My dad took me to my first Sox game when I was eight years old. He bought me a hot dog, a Coke, and a Jim Rice pin. He showed me where he used to sit when he’d wander over after classes at Northeastern. He pointed out Pesky’s Pole and the Green Monster and where he’d seen Carl Yastrzemski make one of the most amazing catches he’d seen in his life. And he kept score in the scorecard because that’s what Dad always did. And I’ve still got the goddam thing in my closet, Dad’s pencil etchings and all.

And when he got sick, when we knew there wasn’t a lot of time left, each game became a precious form of escape for us. No needles, no doctors, no unsettling hum and whir of electric monitors. It was just the two of us, at the ballgame, talking Red Sox. Just like it always was.

When Dad eventually passed, he did it quietly, surrounded by his family and, hopefully, not feeling much pain. I thank the Gods he had the chance to see the Sox win it all before he left, and one of the few good memories I have of his last days was the two of us in his hospital room watching a replay of game two of the 2004 World Series.

This’ll be my eighth Father’s Day without having the Old Man around, but somehow, I know he’s still watching. Pumping his fist every time Lester mows ’em down. Nodding with quiet approval when Ortiz comes up huge. And telling everyone around him how good this Bogaerts kid is gonna be.

Today, in Dad’s honor, I’m gonna spend Father’s Day exactly the same way he would have: at Fenway Park, watching the Red Sox. And keeping score.

My best to all the Dads out there in SG land. Those still with us, and those fondly remembered.

Next post Kudos, Rusney Castillo, On a Job... Done