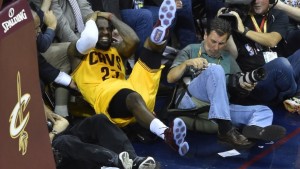 The self-proclaimed “greatest player in the world” will go home to his mansion with no championship and the disappointment of a city on his shoulders. The “all in” Cavs went down at home in game six to a superior team. The key word being “team.” With an opportunity to raise himself to the level of Bird, Magic and Jordan, LeBron once again fell short.

I realize the Red Sox pulled out a rare victory, but the chance to mock LeBron is too hard to resist. Imagine having the physical size and skill that he has, combined with being allowed to commit offensive fouls on every possession and getting to the free throw line any time someone plays defense on you…and still being unable to lead your team to victory.

How the city of Cleveland embraced the man that abandoned them to “take his talents to South Beach” reeks of desperation. No Cleveland team has won a championship since the pre-Superbowl Cleveland Browns won in 1964. This year, the Hollywood script was written but the leading man couldn’t step up to the task.

We will hear it all – the team was undermanned, devastated with injuries to key players. LeBron was banged up and exhausted. LeBron didn’t get the calls in games five and six. The reality is that LeBron is not a winner. A big mouth and a bigger ego are not enough to win championships.

Congratulations to the team effort by Steph Curry and the Warriors and the outstanding coaching by Steve Kerr.

I now return you to your regularly scheduled Red Sox misery.