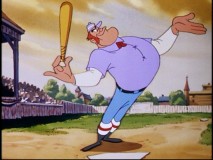 We may look back on Red Sox Opening Day 2015 as the day Clay Buchholz became an ace. I know, I know, we’ve seen this type of performance before. Hell, we’ve seen it for half a season…but didn’t this one feel different? A three-hit shutout in April, seven full innings, nine Ks and just one walk. It was masterful, and this booze-addled yahoo thinks it’s going to be his Cy Young season.

This just in: the Red Sox can hit. Nine very efficient hits resulting in eight runs. Two hits from the Mookster in the leadoff spot, including one of the teams’ five homers. Hanley and Pedroia each added two – one of Hanley’s of the grand slam variety, so he’s on pace for about 800 RBI this season.

It would have been nice to see some production out of Big Papi in the win, but his stellar play at first base was contribution enough. The big man will probably need a week off after that workout. And what of this Panda character? A meaty 0-for-5 with three strike outs. Does anybody else smell bust?

So that’s what we do here, overreact to every win, every at-bat, every pitch. It’s called being a fan.

My final word on this Opening Day: inter-fucking-league play to open the season? I’ve come to accept that there are two or three high-powered officials in the MLB organization that keep this heinous ruination of the game alive, sitting in their penthouses sipping twenty year old scotch and puffing away on illegal Cubans. Cigars, that is. But Opening Day? Shameful.