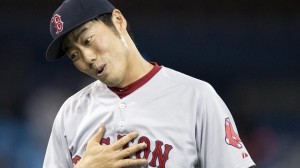 Yeah, that’s probably the worst title for any post I’ve written, but since we’re talking about the worst Red Sox team I’ve ever seen, it fits. Tonight was the Sox way of putting an exclamation point on SUCK.

Anyone that thought the Sox would be up 3-0 going into the ninth against King Felix and the Mariners has either smoked too many tea bags or is a liar. But Joe Kelly out-dueled Hernandez until Farrell pulled him for precautionary reasons…and we all know what that means. Okay, I have no idea what it means either.

Fast-forward to the ninth and enter Koji Uehara. A single sandwiched between a foul to the catcher and a strike out and it looked like business as usual for Koji. But it wasn’t. Uehara looked like Roy McAvoy at the end of Tin Cup asking Cheech for ball after ball until he’d sealed his fate. By the time Farrell realized what was happening, it was game over.

As I mentioned in our latest podcast, long after everyone had stopped listening, when does Farrell’s honeymoon end? The aforementioned Cheech Marin could have managed the 2013 team after ValentineGate and won the World Series, but can anyone name a single move that Farrell made this season that worked? Leaving Koji in for 37 pitches and five runs clearly did NOT work.

Can’t wait to see what the boys have in store for us tomorrow.

Next post Xander Gets Drilled, King Felix Says, "My Bad"