Now The Baseball Gods Are Just Screwing With Us 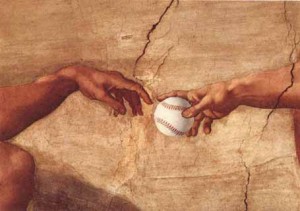 Back in April, when the defense of the 2013 World Series began, we were hopeful. Sure, Ellsbury was gone, but the rest of the team was pretty much intact. And at the end of April, the team was sitting at 13-13. As George Costanza would say, “Right in the meaty part of the curve, not showing off, not falling behind.”

May brought us a new fad with the 2014 team, doing shit in bunches. First, a ten-game losing streak (featuring three walk-offs) followed by a seven-game winning streak that spilled into June. Still, after the June 1st win, the Sox were still hanging on just two games below five hundred. The dark cloud was coming, though. The Red Sox panicked and signed Stephen Drew.

Here we are, July 1st, and for those of you who haven’t admitted it yet, say it with me: the season is over. It’s gotten almost comical. Last night the Sox were nearly no-hit until – you guessed it – Stephen Drew broke it up for the only hit. The Baseball Gods had a nice chuckle over that, I’m sure. Tonight, the pain was delivered in a different method. This was the old “put-the-closer-in-a-non-save-situation-and-see-him-fail” deal. The journey was different but the result was the same, another notch in the L column.

Next post The 2012 Red Sox Would Be On Track for the Playoffs Right Now. And If Your Aunt Had Balls She'd be Your Uncle.

Previous post And the Red Sox Went Down, Down, Down Into a Ring of Fire