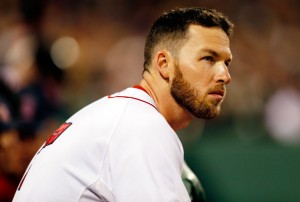 My history dislike for the Drew family goes way back, it has roots. I didn’t think they should have paid JD 14 mil a year, and he proved me right by being soft, injury-prone and less than inspiring. He was the anti-Trot-Nixon. Then, the Sox went and signed brother Stephen. The kid played good defense at short, but he was forgettable with a bat in his hand. When things started going sideways this year, I begged the front office not to fall into the Drew trap again. But just like my idea for the Denton-Cam at Fenway, my pleas fell on deaf ears.

Somehow, Ben Cherington and John Farrell forgot one of baseball’s oldest and most sacred rules. Crash Davis said it this way: I told him that a player on a streak has to respect the streak. The same goes for a team on a streak. You don’t fix what ain’t broke. You don’t screw around with the good mojo. Would it have killed the Sox to leave things alone until the streak ended?

And even though this one is on John and Ben, it fuels my dislike for Stephen Drew. Sure, I’ll root for him, but I don’t have to like him. He will be my whipping boy, my sacrificial lamb, my scapegoat for anything and everything that goes wrong. Welcome back, a-hole.