Mike Napoli and Shades of 2013 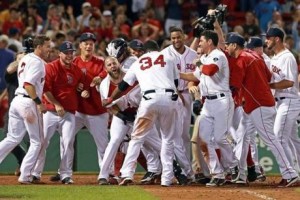 It took until the fifth inning for the Red Sox to get their first hit, a Daniel Nava ground-rule double. And that was their only hit during regular frames. When Koji gave up the homer in the tenth, it looked like another nuts-against-the-cheese-grater loss. Then Big Papi and Mike Napoli channeled a little bit of 2013 magic.

After Pedroia flied out to deep right, Ortiz went to 3-2, fouled one more off, then homered to right. Mike Napoli got down in the count 0-2, remembered he was Mike Napoli, and sent the next pitch into the seats in center field. Game over.

I’m not going to sit here and say this is the one that puts them on a run. But it might be. It was certainly reminiscent of the summer of 2013 where every night was a drunken blur of come-from-behind wins and walk-off home runs. Of course we also had Jenny Dell, not some crazy-haired Asian dude interviewing 100-year-old fans in the stands, but nevertheless, today just might be the one that we look back and say, “that’s when it started.”

Next post The Surviving Grady Red Sox Podcast: Talking to People About 2004 with Guest Angie C