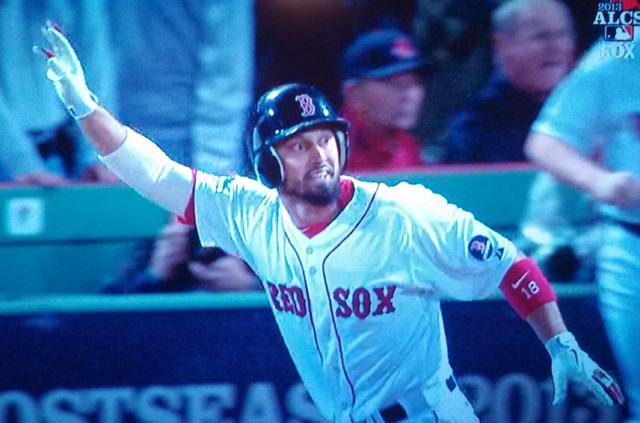 When Shane Victorino stepped to the plate last night with the bases loaded and the Sox down 2-1 in the seventh inning, I wasn’t expecting much. Earlier in the game, with men on first and second and nobody out and a chance to put Scherzer behind the eight ball, The Flyin’ Hawaiian failed to execute a bunt, popping out to the pitcher, and snuffing what had the makings of a fine inning for the Sox.

In fact, the minute Shane stepped to the plate in the seventh, I tweeted the unthinkable–that I would rather see Stephen Drew at bat in this situation than Victorino.

I was expecting the very worst–anything from a double play to Shane swinging and missing on strike three and letting his bat sail into the Sox dugout to take out Lester and Ortiz.

Again, the baseball gods proved me an idiot. Victorino crushed one into the Monster seats and Red Sox Nation lost its collective shit. It was the ultimate redemption moment for Shane, who had only one other hit in the series and, thanks to his earlier gaff, was dangerously close to being one of the primary reasons the Sox might have to face Verlander in game seven.

Interestingly, as if you ever needed another example of how things change in baseball, one of the moments that solidified Victorino’s hero status came when Jose Iglesias, deified by the FOX broadcasters for his smooth glovework throughout the series, botched what might have been a DP ball to load the bases.

The best part of Shane’s slam was the reactions. The fans in the seats went apeshit. The Sox players went into a full rugby scrum. And the Tigers players were gripped with the realization that it was probably over for them. As if the sight of Fielder flopping around third base an inning earlier hadn’t already told them.

As Tigers reliever Jose Veras, who surrendered the bomb, explained: “It was the pitch that we wanted. He had been struggling, 1-for-22 the whole series with the offspeed. We made the offspeed and he made the adjustment.”

Perhaps the saddest response came from Torii Hunter, whose lasting impression in this series was went he went tits-up in the bullpen chasing Papi’s grand slam in game two:

“We probably should’ve won at least one of these games, and it should’ve been three-three, but why? It’s over with. You can’t do anything about it, can’t take it back, it’s over. It’s tough. I’m an older guy. The door is closing. It just rips your heart out.”

Here are the best reactions to the slam in one convenient GIF, from the celebratory to the “I just wanna go kick rocks.”

Next post Koji Uehara: Kind of a Big Deal

Previous post How the Red Sox Won the ALCS, In Four Simple GIFs