I Now Root For Four 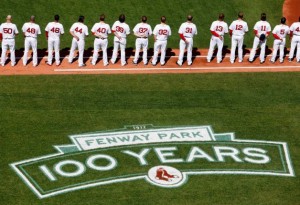 For the rest of this season, the Boston Red Sox, to me, are Papi, Salty, Padilla and Clay. The rest of these classless, selfish losers can suck it. I know it’s old news by now, but it’s been pissing me off all day. The guys I mentioned are the only four players that showed up for Pesky’s funeral. Four. Out of 25, plus the guys on the DL. It makes me feel dirty for being a Red Sox fan.

Of all the low points this season, this is the lowest. I could give a pass for one or two guys that had legitimate conflicts or personal issues, but not 21 of them. This goes well beyond the fact that these guys have shown no professionalism all year, this speaks to their character. And it doesn’t speak well.

And if that wasn’t bad enough…most of them showed up the same evening for the Beckett Bowl.

Next post "They're Dead, Jim" or How the 2012 Red Sox Became Red Shirts