“How Ya Like Us Now?” or “Adrian Gonzalez Has Got 99 Problems But the Orioles Ain’t One” 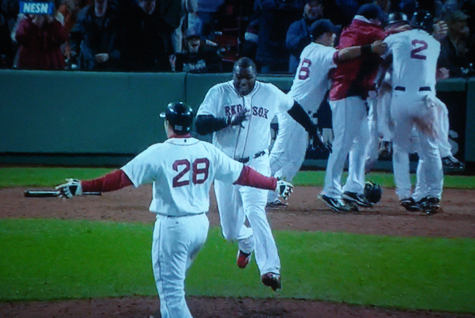 Couple weeks ago, we would have lost last night’s game. No question. The staggering amount of runners left on base. The inability to crack a timely hit. It was strikingly familiar. And for a minute, I feared we might be falling back on old, familiar ways.

Then Adrian Gonzalez pounded us all in the tits, capping a spectacular comeback with a walk-off double and proving that, to paraphrase the immortal R. Lee Ermy, the 2011 Red Sox have been born again hard.

We were losing 6-0 for chrissakes. And all the positive vibes we picked up in the Bronx were being slowly sucked out of the Fenway air. But they slowly clawed their way back, with contributions from pretty much everyone in the line-up–particularly Gonzo and The Elf, who had a gutsy at-bat in the ninth to set up Adrian’s big hit.

A few weeks ago, all hope was lost. This was gonna be the Season of Mediocrity. The .500 Express. The Slow Boat to Third Place.

But now, we’ve got momentum. We’ve got fire. We’ve got that awesome fury of a Fenway walk-off, complete with “Holy-Shit-Don’t-Let-Youk-Land-On-Anyone-In-The-Pigpile” angst.

We’ve also got a winning record for the first time this season. Standing a mere three games out of first place.

I’m still trying my best to take it one game at a time. But wins like this one make it so damn difficult.