Buck Showalter Will Pound Your T*ts 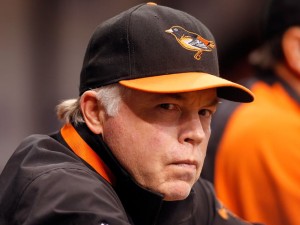 I was sitting in the dentist’s office a few hours ago, and, after the receptionist told me I had to shut off my phone and put my pants back on, I picked up the latest issue of Men’s Journal and gave it a quick thumbing. My eyes were drawn to a feature story on Buck Showalter, which offers an intriguing and sympathetic view of the Orioles skipper, and shows that he’s not exactly quaking in his spaceboots over the Monsters of the AL East.

“I’d like to see how smart Theo Epstein is with the Tampa Bay payroll. You got Carl Crawford ’cause you paid more than anyone else and that’s what makes you smarter? That’s why I like whipping their asses: it’s great, knowing those guys with the $250 million dollar payroll are saying ‘how the hell are they beating us?'”

Good stuff. But the real gold is Showalter’s expression for wearing down opposing relievers:

He’ll keep mental lists of opposing skippers who get their relievers up early and bait them with moves in the middle innings so he can “pound their tits” in the eighth.

Man, would I love to hear Terry Francona drop that science during a NESN presser. “What’s the strategy, Teets?” “Well, we’re just gonna pound their tits until our bats wear ’em down.”

It’s Lackey versus the Rays tonight at 7:05pm. Getting us one day closer to the real thing.