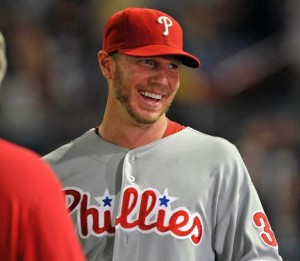 Sitting here on March 21st, the first day of spring despite white crap falling from the sky all day, it’s easy to imagine today’s pre-season match-up could be repeated in October. Jon Lester and Roy Halladay, two of baseball’s finest, faced off this afternoon at Bright House Field.

When the dust settled, Halladay was…Halladay. He went seven-and-two-thirds giving up just five hits and one earned run. He looks ready to make another Cy Young run.

Lester looks like he has a little work to do. He went five-and-a-third, giving up four runs (three earned) on five hits, and here’s the bad part: four walks. Lester’s walk totals were way up last season – 83 compared to 64 the year before. Lester knows this is an issue, but it looks like he hasn’t found a solution. I’m sure he’ll figure it out. Right?