Welcome to When Everything That Doesn’t Make Sense Makes Sense 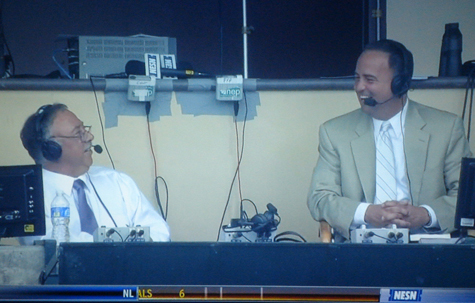 These days, I can’t watch a Red Sox game without thinking of that line from JFK where Kevin Costner says, “We’re through the looking glass, people. Black is white and white is black.”

Because that’s what the month of April has been like for Sox fans. The first couple weeks, nothing made sense. The line-up that was supposed to tear ass through the American League couldn’t hit its weight in Fenway Franks. The pitching staff we’d already started fitting for an October showdown with the Phillies couldn’t shoot straight. The Sox were 0-6 on the road. And the losses and bad vibes started piling up like cord wood.

But the last few weeks have been the exact opposite. Suddenly, the bats are hot. The road is a friendly place. Josh Beckett and Daisuke Matsuzaka are pitching like it’s 2007. And today, Gentleman John Lackey, the only member of the starting staff who had yet to be born again hard, shut out his former team across eight innings.

Even Carl Crawford, who has looked absolutely hapless at the plate for much of this month, is starting to come around, getting his first home run as a Red Sox and, hopefully, opening the door for what the French call “shitloads more.”

And through it all we keep creep, creep, creepin’ up the standings, from the cellar to third place, just 3.5 games behind that Yanks and one game under .500.

Simply put, it’s the worst possible time for an off-day. Which is what we have tomorrow. But on Tuesday, we play Buck Showalter’s Orioles. I sense a tits pounding.