That’s Why We Call Him Commander Kickass 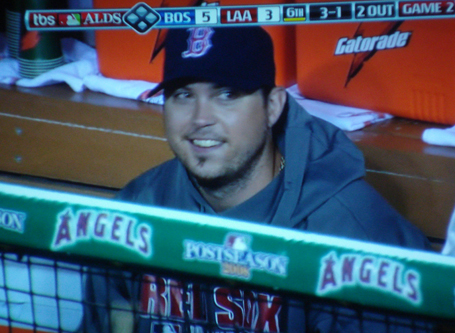 Nah, you don't want to know why he's smiling.

There have been plenty of times post-2007 where we’ve turned to Josh Beckett to change up our fortunes, and the guy just couldn’t deliver. Couldn’t get it done. Went tits-up when we needed him most. Things got so dire of late, in fact, we considered demoting him from Commander Kickass to Corporal or Private First Class.

Turns out we spoke too soon. Last night, vintage Beckett showed up and hurled eight shutout innings against the Yanks, giving up just two hits and striking out ten in the process. No, it wasn’t the first ever shut-out-thrown-while-servicing-two-ladies-simultaneously-and-drunk-on-Coors game that I know he’s got up his sleeve. But it was still awfully sweet.

In fact, between all that Beckett goodness and a key hit from Papi and Papelbon closing it out, I almost had to remind myself we were four seasons removed from 2007.

Yeah, we left roughly 47 men on base. But those are the details you overlook when you win your second game in nine attempts. We can worry about that shyte tomorrow. Right now, I want to bask in the glow of winning our first series of 2011. And I hope wherever Commander Kickass is right now, he’s about seven beers deep.