And Stars Fell on Lansdowne 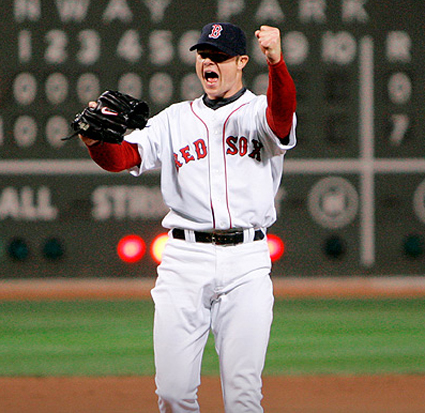 For those of you keeping score:

In 2006, Jon Lester was diagnosed with anaplastic large cell lymphoma.

In 2007, he won the clinching game of the World Series.

In 2008, just a few hours ago in fact, he pitched his first complete game–a motherf@#king no hitter against the Kansas City Royals.

Is there any doubt that 2009 will find him marooned on a deserted island with Jessica Biel, Jessica Alba, Heidi Watney, the Celtics Dancers, that chick from Gossip Girl and Jenna Jameson–a deserted island conveniently stocked with beer, steaks, ecstasy and Tom Waits’ entire discography pre-loaded on a 1,000-watt stereo system? Because you just know it’s going to happen. And it couldn’t happen to a nicer guy.

Anyway, here’s the final out, courtesy of the fine folks at NESN. A couple of things to watch out for: First, the bit at 1:15 where Tek taps Lester on the back and hands him the game ball. I want that segment submitted right now to the Academy of Television Arts and Sciences for Emmy consideration. F@#kgodalmighty, a week’s worth of Law & Order doesn’t pack as much emotion.

Also, the bit at around 2:00, where Tito takes Lester’s head in his hands, hugs him like he’s juicing a goddam grapefruit, and says something along the lines of “I’m so proud of you.” I love the fact that Tito basically forgets himself, loses his shit, then suddenly turns, trying not to look at the cameras, and scampers off. Lovely stuff, and I’ll admit that it achieved “last five minutes of Field of Dreams” status as a clip that can reduce me to tears almost instantly.

Previous post George Brett Reminds You to Drink and Screw Responsibly, and to Enjoy His Kansas City Royals