I don’t really want to dwell on what was by far the ugliest game I’ve seen in some time, but I’ll note that in some games, there’s a point where the “tone” is set, and you more or less get a pretty good read on how the cards are going to fall. Last night, that point was Kevin Millar taking a called third strike with the bases loaded to end the first inning. Any kind of hit would have plated a few runs and made it a game after the A’s scored three in the top half. But this strike out — on a pitch that was literally right down the middle — landed in the catcher’s mitt with such an ominous “thud” you could hear the joy being sucked out of Fenway like Roger Ebert working a cherry Slurpee.

The role of Kicked Puppy was played by Bronson Arroyo, who we all know is so much better than what we saw. But, sooner or later, everyone has an off night. Last night, it just so happened, was his.

Meanwhile, the Orioles were doing their best imitation of the French during WWII, utterly collapsing in an 18-5 loss that sealed the Yanks’ series sweep. Man, do the Crankees own the Os or what? It would almost benefit everyone involved if they’d just automatically assign the Ws and Ls from the get-go and let the guys spend the next three days playing Skee-ball and chasing tail. Because tail needs to be chased, Junior. Yes it does.

Oh well. There’s only one thing that can cheer me up right now.

…and for the ladies:

…and for those ladies not into Kerry (but, seriously, how could you NOT be?), Beth from Cursed and First offers: 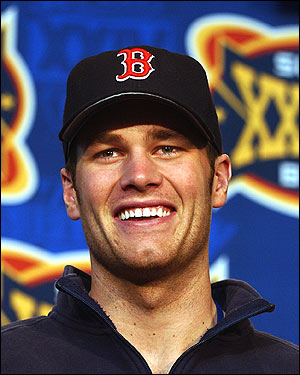 Tonight, it’s up to Petey. And I have a feeling he’s gonna make us happy and get all this nonsense behind us. And here’s a prediction you can take to the bank: Manny’s going yard. You read it here, folks.