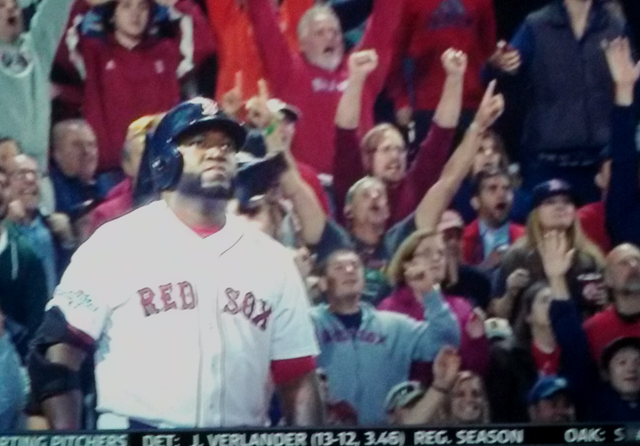 I say no. So we must keep watching. And I would also respectfully suggest to any members of the Academy of Motion Picture Arts and Sciences who might read this that you say “f#$k all” to your rules and retroactively name this clip Best Picture of 2013.

In the mid 90s, my dad was diagnosed was cancer. By the time the 2004 ALCS rolled around, that cancer was spreading, unimpeded. We knew there wasn’t a lot of time left, and watching the Sox piss away their chances in the first three games of the series just brought home the point that my old man would likely never realize his life goal of seeing his team win it all.

But then, game four happened. And then game five. And with every night, it seemed that Ortiz literally gave us a new lease on life. Despite the drugs and medication and despair and uncertainty, my dad was born again that October. It had been a long time since I saw him so animated, so excited, so goddam optimistic about things to come.

Ever since that night, ever since the pomp and circumstance of 2007 and 2013 and everything in between, I knew this day would come. The end of Ortiz’s career is the end of something unspeakably awesome. I’m just exceptionally fortunate to have experienced it.