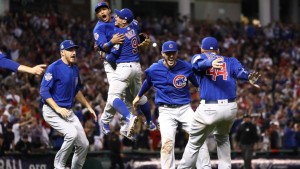 The Cubs won their first World Series in 108 years. Yay. I guess as a long-suffering Red Sox fan, I should be happy for the Chicago fans. And I am. I just wish Terry Francona wasn’t the guy on the bench across the field from Joe Maddon. I thought Maddon made a lot of terrible decisions that should have cost him the series, but his players bailed him out in the end. Most notable was his bringing in Chapman in game six with a five run lead, and bringing him back in the ninth with a SEVEN run lead. My dream was to have Maddon bring him into game seven and watch him blow the lead and cost him the series. And it almost happened.

Next post David Ross, Anthony Rizzo and Dexter Fowler Playing Male Strippers on SNL May Be the Greatest Thing Ever

Previous post Out of 201 NFL Victories, Tom Brady Picks One; The Most Recent Super Bowl