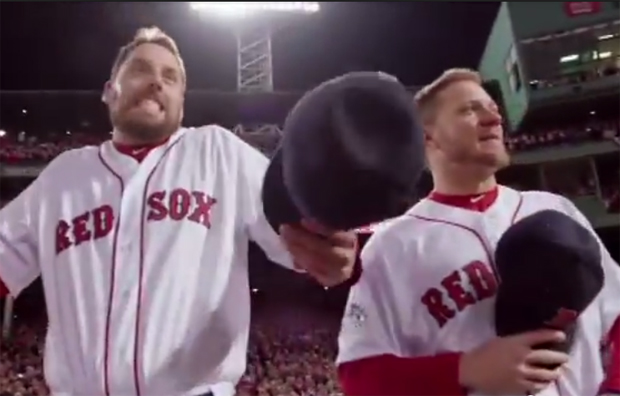 When Jon Lester was shipped out of town last week, the whole city literally came to a standstill. People wouldn’t eat, dogs wouldn’t fetch, Little Leaguers from Chelsea to Marblehead cried in their mitts.

John Lackey was sent packing that day, too. But there weren’t a lot of tears shed. In fact, after the guy left, the whispers started up again. Anti-Lack sentiment I hadn’t heard since he shut down the St. Louis Cardinals in game 6 of the 2013 World Series, basically securing our home field celebration.

“You know he was gonna retire rather than honor his contract with the Sox.”

“He had Sox management handcuffed! Teams were afraid to trade big for him in case he walked.”

“He never liked any of us. Hated this city. Good riddance.”

Look, I never met John Lackey. Everything I’ve heard about the guy has come from sportswriters who may or may not have an agenda. I just know that my eyes saw him come back from Tommy John surgey and play a major f$%king role in our 2013 championship season. Without his monstrous effort against Justin Verlander in game three of the ALCS, I don’t think we get past Detroit. And the aforementioned game six was certainly the second biggest of his Boston tenure.

Myself, I always kinda liked the guy. And wanted him to do well. And thought he got something of a bad rap during his time here. I was glad to see his redemption.

That’s why it crushed me to see him in the home team dugout in St. Louis yesterday, being sized up by the Boston media like a juicy ham. At one point, Lack even threw up his hands and said, “You guys are tryin’ to start stuff” when prodding questions about his feelings toward Boston and the Red Sox persisted.

It sells papers, I guess. It gives people something to gripe about.

So I wanted to write a more positive send-off for the guy. But then I realized I already did it. After the World Series win. When rumors started swirling that he might be drawing interest from other teams over the winter.

So, in the grand spirit of laziness, I’m recasting that post right here. And I wish you well, Mr. John Lackey. Thanks for 2013.

John, when I first heard we’d signed you, I’ll admit, I was skeptical. We were doling out a lot of money to a guy who, while pretty good, just didn’t seem “five years/82.5 million dollars” good. Not to mention that for all the times we faced your Angels in the playoffs from 2007 to 2009, I’d only seen you pitch one true gem, when you stuffed us in game one of the 2009 division series. Then there was all that stomping and shouting and general pissyness after the 2008 ALDS. I wasn’t sure what kind of teammate you’d be, let alone what kind of roommate.

Then you got here. And you went a fairly unspectacular 11-14 in your first season with us. Perhaps coincidentally, your inaugural year with us also broke our string of three straight years of postseason appearances.

The next year, 2011, was somehow even worse. Then you went down for Tommy John surgery in 2012, and the big joke was that your very absence from our rotation would be the best thing you’ve done for us since we signed you. But even without throwing a single pitch in the SS Valentine debacle, your alleged clubhouse beer-swilling became the picture of everything that was wrong with the team at that time.

I don’t quite know when I turned. Maybe I felt bad after your “everything sucks for me” diatribe. Maybe I watched that Intentional Talk interview with you and Jonny Gomes and realized that to the people you played with, you were a stand-up, well-respected guy. Maybe I just desperately wanted to believe that something better had to rise from the wreckage of the previous season. Whatever the case, I boldly predicted you’d win 20 games and pegged you for comeback player of the year before the team broke spring training. I should probably add that I drink a lot.

Then, as the season meandered on, something amazing happened. You rocked the mother$%king house.

It wasn’t always pretty, and the numbers may not have been the most impressive. But for a good stretch of summer, you were our most reliable pitcher. The horse whose back we all jumped on. The guy we could somehow count on to eat innings and keep us in games. Suddenly, you could say things like, “Lackey’s pitching tonight and I feel good about that” without sounding sarcastic.

It’s impossible to underestimate the scope of your rebirth. You had Tommy John surgery. You were regularly treated to the slings and arrows of the fans. The local sportswriters seemed to relish every opportunity to inform us whenever you stepped within a three-meter radius of the clubhouse fridge. If you had pulled a Carl Crawford and just blamed the city for eating you alive and spitting you out, it would have been one-hundred percent understandable. It wouldn’t have absolved you from sin in our eyes, but we certainly would have understood.

But you soldiered on. Not for us, I’d imagine. But for you. For your teammates. For the chance to show up everyone who wrote you off. And with that win over Verlander in game three of the 2013 ALCS, you provided one of the bookends — the other being Ortiz’s game two granny — that helped vault us over the wall. On the biggest stage of your Boston tenure, perhaps even your entire career, you came up huge. And suddenly, we were all on your side.

A week later, you started what turned out to be the clinching game of the 2013 World Series. Again, you delivered, outdueling Mike Wacha–an idea that, on paper, seems almost crazier than Ben Affleck playing Batman. And after the final out, as the team swarmed the field, the crowd was chanting your name and none other than Jon Lester — the poster-boy for everything that is right and good with this team — came up and bear-hugged you during an interview on national TV. It was a straight-from-left-field Hollywood ending featuring you as Leo DiCaprio and Red Sox Nation as Kate Winslet and Fenway Park as the bridge of the Titanic. Cue Celine Dion and fade to black.

I know you’ve got a couple years left on your contract. But one of those comes at the minimum salary, thanks to a provisional clause around your surgery. And rumors are flying fast and furious that the inquiries for your services are coming in from other teams. I don’t want to lose you, John. I don’t want to lose us. But, on the other hand, I’d like our memories of each other to be just as they were on October 30, 2013. A smile on your face, a Bud Light in your hand, “Lack-ey, Lack-ey” ringing through the Fens.

Who are we to dirty this up? You know how we fans are. Start slipping next season, and the boo birds will be back. And the media will be on your neck again. And then there’s the chance for a Keith Foulke-esque “Johnny from Burger King” comment. And we sure as hell don’t want that.

We doubted you, you proved us wrong. The critics wrote you off, you helped us bag a World Series title. The folks who cracked chicken and beer jokes hoisted a sign that read, “Red Sox Nation apologizes to John Lackey” during the rolling rally. In many ways, your work here is done.

Please don’t misunderstand. I dig you. I think you bring a lot to the team. And if we harbor any dreams of earning back-to-back titles, your skills will almost certainly be required.

But I want you to know that if you end up being shipped to greener pastures, it will just make everything we shared that much more endearing. And enduring.

And, selfishly, that’s how I want to remember you.

Next post The Surviving Grady Red Sox Podcast: Talking to People About 2004 With Guest Amara Grautski