You Thought “Chicken and Beer” Was Bad?

From The Dallas News:

Derek Holland: “Basically, there are two games. One is called pink eye. That is when you just fart in somebody’s face and they can’t flinch. If they move, there is a penalty for it. This all came from Mark Lowe. ‘Fart Bottle Roulette’ is when you get a bunch of little water bottles, fart into one of them, put them in a bag, shuffle it, and than watch everybody’s reaction. Everybody opens a bottle one by one and it’s the most nerve-wracking thing every because you really don’t want that bottle.”

Wow. That sounds like an episode of Ellsbury ‘n’ Elf! Sucks to suck.

Next post Are the 2014 Red Sox an Actual Thing That is Happening? 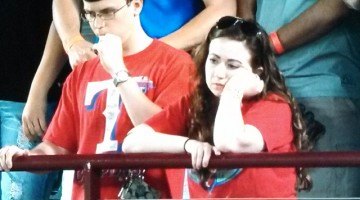