“Thank You, Adrian Gonzalez” and Other Things I’ve Never Said 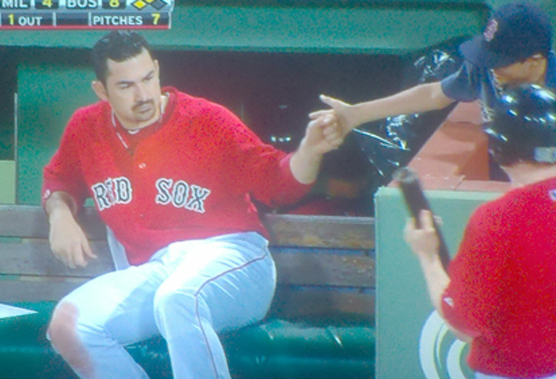 Perhaps the only good thing to come out of our recent 1-3 trip through Kansas City was the fact that while the Royals were treating the Sox like it was their first night at Shawshank, the Rays were getting steamrolled by the Dodgers.

In fact, L.A.’s three-game sweep of Tampa Bay was fueled by a few familiar faces. Adrian Gonzalez and Carl Crawford contributed a combined seven hits and four RBIs across the series, with A-Gon going yard in the first inning of the second game. The Freewheelin’ Nick Punto even got in on the act, adding four hits and three RBIs to the mix, indicating just how bad things got for the Rays in that series.

As a result, the Sox pulled out of Missouri with their pride trampled, but their lead in the AL East intact. This morning, we remain three games up on Tampa Bay.

I know I didn’t say this much when you guys were in Boston. In fact, I probably never said it all. But I want to thank you, Carl Crawford, Adrian Gonzalez and Nick Punto. For finally coming through for me.