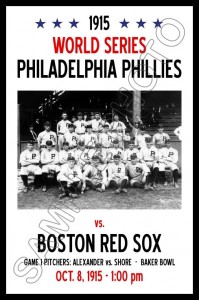 One of the features within the newly installed season-long interleague play schedule in Major League Baseball this season is a handful of four game series in which each of the alternate home field for two games apiece. On Monday, the Phillies and Red Sox began one such series.

The series opened at Fenway Park on Monday for the first two games. With the Phillies playing mediocre baseball all season long, and not viewed as a traditional rival in the eyes of Red Sox fans, demand is not all that high for this matchup. The return of Jonathan Papelbon isn’t something fans are willing to pay top dollar for either. According to TiqIQ, games one and two of the series at Fenway Park checked in with average ticket prices of $90 and $89 dollars respectively, and 22% below the $115 average price of Red Sox tickets this season. For each of these two games, tickets were (and are for tonight) available on the secondary market for as little as $17 dollars.

Ticket prices for the Fenway Park portion of this set are a far cry from where they sat for the last meeting in Beantown between these two teams. With secondary market tickets a whopping 44% below the Red Sox vs Phillies tickets from 2010, it’s safe to say that the draw power of these two clubs have changed markedly in the past three years, and fans are serving to exemplify that with their wallets.

When the two teams travel to Philadelphia for games three and four on Wednesday and Thursday, the ticket pricing landscape looks awfully similar. Wednesday’s contest is the less expensive of the two, carrying an average price of $79 dollars with a get in price of $14. Thursday checks in with an average price of $83 dollars, with tickets available for as little as $17. The Citizens Bank Park average ticket price of $81 dollars for this series is roughly 8% below the $88 average price for Phillies tickets at home this season.

While this year’s Red Sox @ Phillies tickets are just 2% below those of last year, when looking back just a few more seasons, it becomes obvious just how drastically the pricing power of these two teams has changed. Ticket prices for the Citizens Bank Park portion of this series carry a hefty 30% discount from just two seasons ago in 2011. But it is when looking back to the 2010 season that the change appears most extreme—this year’s two games in Philadelphia price a ridiculous 111% below the series between these two teams just three seasons ago.