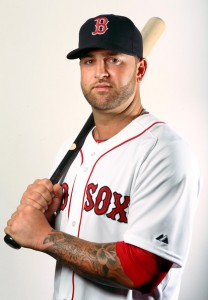 Mike Napoli, co-player of the week in the AL and a dead ringer for the bouncer at every Boston bar, slammed a granny to put the Red Sox in line for their 13th win. To put that in perspective, they got their 13th win in 2012 on May 11th. Thanks again, Bobby V.

Felix Doubrant had a little trouble finding the plate, but when he did the results were good. He walked five but struck out eight, going sox-and-two-thirds for his second win. Clay Mortenson tried to give the game back to the A’s but the rest of the bullpen wouldn’t have it. Tazawa and Bailey (co-player of the week) closed it out, earning Bailey save number four in place of that other guy who used to pitch the ninth.

Alfredo Aceves brings his own form of magic to the mound tonight, along with his 6.28 ERA and possibly some weapons. I’m pretty sure he shows up to the park every day with his suitcases packed. Just in case.

The Sox are in town through the weekend, and I’m sure it will warm up someday. Where’s global warming when you need it? Buy Red Sox Tickets here for the rest of the home stand.

And if you missed RemDawg and D.O. talking hair, well, you missed it.

Next post And Starring Mike Napoli as Adrian Gonzalez