How is the Current Season Affecting Sox Ticket Prices?

With the Boston Red Sox off to a challenging start through the first ten weeks of the season, we decided to take a look at how the team’s struggles are affecting demand for tickets. There’s been rumors of the Red Sox sellout streak being in jeopardy, and unless players start coming back from injuries (and performing) in a hurry, this season could be worse than last year. At least last year it was fun until September!

Anyway, the struggles got us thinking about how the floundering on field translates to ticket sales and more specifically the price of Red Sox tickets on the secondary ticket market, which reflects the real-time demand from Red Sox fans. According to Ticket Liquidator, among the largest ticket resellers out there, the struggles on the field have indeed lowered ticket prices, with an average ticket price as low as $72 occurring during the week of May 6 – 12, following a stretch in which the Sox lost eight of nine games for a .387 winning percentage. Ticket prices that low for Fenway are unheard of this early in the season, and normally don’t come around until the tail end of a season in which it is clear the Sox will miss the playoffs. 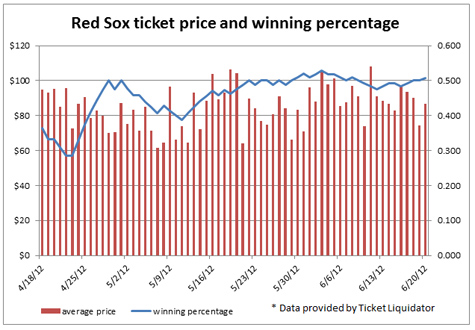 Looking at the average price for a Red Sox ticket bought on Ticket Liquidator, you can see that in mid May, ticket prices rose along with the team’s winning percentage. Following a stretch in which the Sox won 9 or 11 from May 11 – 21, prices rose from a low of $65 on May 12 to a high of $106 on May 19, before prices came back down, and sharply. We can see the effect of a losing stretch in action between June 3 – Jun 11, when the team lost seven of eight games, and prices went from a high of $101 to a low of $74.

2012 Season vs Past Three Seasons
The chart below makes it clear that ticket prices for the Red Sox so far in the 2012 season have been some of the lowest we’ve seen in the past four years. As seen on the next chart, its normal for MLB ticket prices to fall as the season goes on, however the extent of the drop in 2012 has been incredible. 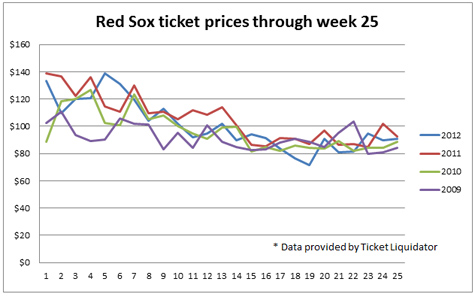 Especially when you consider that pre-season ticket prices matched their highest price ever of $139, a ceiling normally reserved for MLB playoff tickets. Note that the chart starts in January, not the beginning of the season. 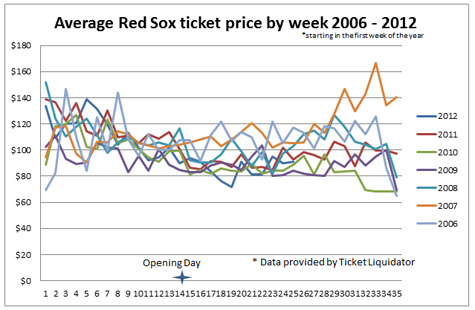 As you can see, 2012 has been a good deal for fans who want to get into Fenway, (if not so much if you want to see good baseball while there). 2012 represents one of the sharpest drops from the start of the season in week 14 of 2012. Additionally, the low price of $72 seen during the week of May 6 – 12 is the lowest price Ticket Liquidator has seen for Red Sox tickets this early in the season going back to 2006.

Just for giggles, let’s take a look at what ticket prices looked like last year, as the wheels came off the fried chicken express. As the chart makes clear, most fans saw the writing on the ball and bailed on the team right around September 10, going from a high of $118 on September 9 to a low of $43 just 11 days later on September 20. A few royal rooters never gave up hope, sending the price back up toward the end of the season, however the price shown on the graph is not really reflective of what people paid as it also contain sales data for playoffs games that never happened. (Ticket Liquidator, like Stub Hub, Tickets Now, etc., all sell tickets to games that may never happen, and customers are refunded if the games never occur). 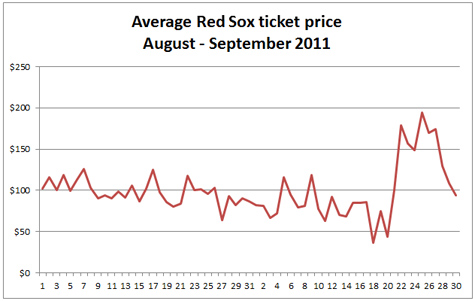 Should I Wait to Buy Tickets to Fenway?
Well that really depends on how you think the team will play going forward. If the Sox start winning, you can expect ticket prices to rise along with the winning percentage. However if the Sox continue to struggle, ticket prices will more than likely fall even lower. $5 tickets, which have caused so much consternation for the Yankees, are not out of the question.

As Red recently pointed out (or was it the liquor), the Sox have Ellsbury and supposedly Crawford coming back soon. If they can stop hemorrhaging players like the ATF loses guns in Mexico, the Sox could go on a tear. Just a short winning streak is enough to send ticket prices up. On the other hand if the injuries continue to mount, Fenway ticket prices will likely fall even further. While there is some talk of Fenway’s sell-out streak ending, we don’t see that happening. Even if the stands aren’t technically full, most of the tickets have already been sold (yes, to a lot of the brokers selling on Ticket Liquidator), and that’s where the sellout figure is calculated, accurate or not.

But if the Sox get some luck for a change, there is still plenty of season left. They’ve been scoring runs as well as anyone. Cody Ross should be back soon, Bailey is making progress. And most intriguing, Mark Pryor has been making progress in Triple A. Of course it’s a long shot, but it would be pretty cool if he came back to be an effective pitcher with the Sox.

So if you think the team is poised for another monstah summer, you might want to stock up on tickets now. On the other hand, if you already have your brown paper bag ready to go over your head, then sit tight at watch the secondary ticket market.