The Tried to Make Daisuke Go to Rehab, He Said No, No, No. Then Relented and Disappeared for What Seemed a Decade. 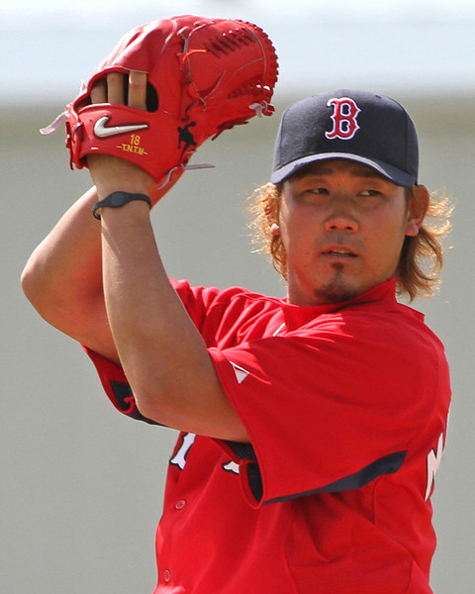 Photo by Kelly O'Connor. Click to check her ST gallery.

Sometimes I have to slap myself to be reminded that Daisuke Matsuzaka is still a paid member of the Red Sox. But there he is at camp, jockeying for position like the rest of the fellas not named Clay, Jon or Josh.

Honestly, any other year, I’d just say let the guy go through the motions, start a couple games, then politely dispatch him to some remote location where he can pass on the legend of the Gyro Ball to another generation. But somehow, I’ve got a bizarre feeling that Daisuke’s going out with a bang–and I don’t mean being clubbed by some drunken, irate pipe fitter who lunges onto the field after another disappointing start.

I mean I truly believe that The Matsu’s gonna have a banner year, recalling images of the guy who gave us the goods in 2007, not the guy who spent pretty much every year since looking like he’d rather be having a colonoscopy on a Tilt-a-Whirl or logging hours at CanadaDrugPharmacy.com than starting a game.

Where are these positive vibes coming from? Well, for one thing, I do believe Bobby V when he says he can turn Daisuke around this season. Bobby’s a proud guy if anything, and nothing would make him seem more genius-like than being the guy who cracked The Matsuzaka Code.

For another… have you seen Daiskue’s hair? His 2012 ‘do signals a guy who means business, providing the perfect, Asian counterpart to Youk’s beard. I believe in that hair like I believe in America, Ed Asner, and that “Tattoo You” is arguably a better Stones album than “Let It Bleed.”

The Rangers can have Yu Darvish. I’m betting the house on Daisuke in 2012.