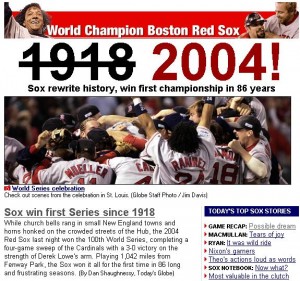 Mother Nature is a cruel prankster, isn’t she? After torturing us all winter, she teases us into thinking it’s over by laying low in March. And dumps more of the white stuff on us for a Friday morning commute that also happens to be Opening Day for the Red Sox – April Fool’s! Thankfully it’s an away game and her little joke will be forgotten when the first pitch is thrown at 4:05. Yes, it’s finally here. As Joe Castig would say – Can you believe it?

Red mentioned on Facebook last week that we were getting ready to embark on our eighth season of Surviving Grady. Our eighth year? Wow. It seems like such a long time, but it also seems like we just started this thing yesterday. We’ve had some good times and bad times, but with two World Series Championships included, I’d say the good times win. To put our blogging longevity in perspective, a couple of stats:

I’m not sure how long the average blog makes it, but I’m willing to bet we’re outliving a lot of them. Which brings me in a very roundabout way to my point: Thank you all for your support. Without you taking time out of your day to stop by our little corner of the Web, Red and I would have folded up the tent a long time ago. And we just aren’t ready to do that. So thank you, as long as you keep visiting, we’ll try our best to make it worth your while.

On to Opening Day. I don’t have an Opening Day memory to rival Red’s, I doubt many of us do. Although I’m happy to say I did participate in a lot of the ones with Red at his dad’s house, and they were all special. I miss them. One of my favorite Opening Day games was April 7, 1986. Dwight Evans hit the first pitch of the entire season for a home run (breaking the record formerly held by Bump Wills, who hit the second pitch for a home run on April 4, 1982). It really set the tone for one of the greatest Red Sox seasons ever (though one of the worst endings).

What will today’s memories be? The first of Jon Lester’s 20 wins? The first of A-Gon’s 40 homers? Papelbon’s first save of 2011? Or his first blown save? I am hoping that something happens today that makes 2011 my new favorite Opening Day. I have a feeling this is going to be a great season and I would love for it to start with something special today. We deserve it.

I leave you with a quote from The Beatles: