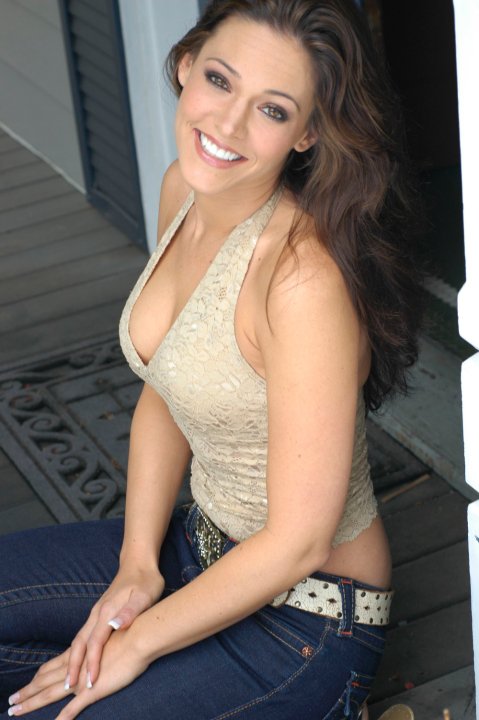 Ask her about our weekend in Vegas.

Back in the pre-Tina, pre-Heidi days of 2004, NESN’s resident bombshell was Krisily Kennedy, the former Miss Rhode Island who worked the Sox pre-game show. The next year, she was gone, leaving for the greener pastures of ABC’s reality show, The Bachelor. But she left some spectacular memories, like the time she and I bumped into each other after a game and ended up going on a six-day bender/bank robbery spree across New England–an event so awesome, it happened only in my mind.

Anyway, as we fumbled through the off-day, we connected with Krisily, and she was kind enough to answer our questions about NESN, the Red Sox and Tom Caron’s pants.

Red: How did you first get hooked up with NESN and what led to you getting hired for the pre-game?

KK: In September of 2002, I was crowned Miss RI USA, and with that title came loads of appearances. One of these was guest hosting the Jerry Lewis Telethon on the local ABC news channel. I showed up, had a lot of fun, and became friendly with one of the producers, whose name was John. While talking between breaks, John commented on my Harley Davidson purse — how many pageant girls do you know that love motorcycles or will admit to it — and we shared our passion for bikes. I mentioned my interest in becoming a television host, and he said that we met at the right time, because he was looking for a fun female co-host for a motorcycle-themed show called The Ride that he was pitching to NESN. I worked on The Ride for a season, and then John got a call from NESN looking for a female correspondent to do what some people would call “fluff” pieces for the pre-game show. I guess the YES network was doing something similar and NESN wanted to compete. I jumped at the opportunity, went out for the audition and was called back a week later to start working.

Red: What are some of your fondest memories of the NESN gig? Anything stand out?

KK: This is a tough question, since there were so many good memories. I guess my favorite would still have to be the fact that I got to be on the field during batting practice at every Sox home game at Fenway. To someone who was a fan since I was child, that was amazing! But the player interviews were so much fun. I loved to talk to the players about anything but baseball; what they did on off days, or during the off season, who had Harleys and who had sport bikes–the sort of stuff that us fans don’t always get to see. I wished they would have brought me back in some way just to do those interviews.

My all time favorite memory is when I fell while walking with my camera man in front of three Yankees players after a game. One of the players was kind enough to help me up, and the next day, while on the field for BP, those same players were happy to remind me of my fall. It was hysterical. Second best was the day I did a piece on the Fenway score board and they let me sign my name on the wall inside the score board. I didn’t feel worthy because it was like a wall of fame — I mean, some of the signatures in there are amazing, and mine is there, too. I need to go back and get some pics of that.

Red: Did you work much with Tom Caron and can you please confirm my suspicion that he does the pregame show pantsless?

KK: I didn’t get to work too closely with TC, but how did you know he went pantsless? Actually, he wears swim trunks with big palm trees.

KK: That would be hysterical, wouldn’t it? But no, every time I saw him, he was in full suit and I will also say he was very helpful to me when I first started with NESN. He was even more helpful when I started doing live feeds, which I was scared to death of. 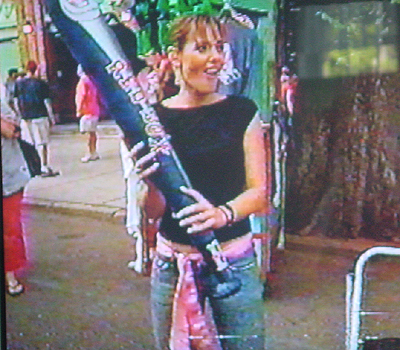 Krisily working it during the NESN pre-game show, circa 2004

Red: Any Sox players stand out as good interviews?

KK: I was able to meet a lot of the guys on the field, but was only able to interview a few of them. Actually, a lot of my player interviews usually ended up being the opposing team. But I loved Varitek, Manny and especially Ortiz. He was like a big goofball, always smiling and laughing.

Red: You were also on the reality series “The Bachelor.” Just one question there: Is any of that stuff scripted or is it all truly “reality”?

KK: I have to honestly say that being on The Bachelor was a blast. I had the time of my life, and it was really a great experience. I made friends that I still have today and got to travel–what’s better than that? I will also say that absolutely none of it is scripted. It’s as real as it can get when a guy is, well, taking you to a private island for your first real date. Of course, all of my first dates are like that so I’m used to it, but I can see how some girls would get all worked up about something like that. [Laughs.] It’s really a great concept if you think about it. I still watch every season.

Red: Lastly, what are you up to these days and do you still follow the Sox?

I moved out to LA about 4 years ago to follow my dreams which, by the way, change like the weather on the east coast. But television hosting has always remained my first love and is what I hope to end up doing. I’m currently working as a Producer’s Assistant and loving my job. My boss is amazing and I’ve had the chance to work on two films–one called Middle Men, which is a must-see, and another that I might be appearing in. Of course, I still follow the Sox and get my ESPN updates on my phone for every play so I don’t miss a thing. There are even some great Boston bars here in Los Angeles in case I want to go out and enjoy the game with some good old Boston fans.

Thanks to Krisily for her time. And congrats to the Celtics.