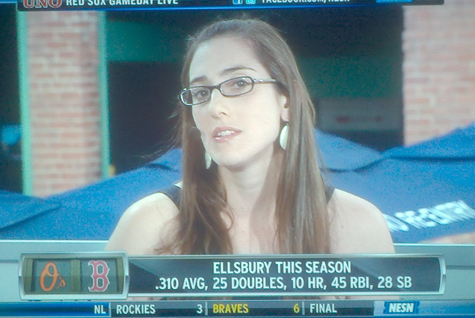 Been following Ms. Benjamin’s tweets for some time now. And I dig them, because it’s Amalie and she knows her stuff. But sometimes I wish they’d give us more of a glimpse behind the wall. Behind those exquisite glasses, if you will. I want more Ama-nutaie, goddam it.

Like where she’ll be going for dinner tonight (not in a stalky way, but in a “is she a red meat or seafood kind of person?” way). Or if she agrees with me that GoodFellas kicks The Departed’s ass six days a week and twice on Sunday. Or if she ever finds herself alone in a dark corner of her no doubt swanky apartment, sitting in the glow of a perfumed candle, staring at the chess board set for two players, and wishing—dare I say yearning—for a pale, tall, goofy Irishman (with a blog) to take her on.

Hell, I know that’s not her job; she’s paid to write about the Sox and she does a damn fine job of it and her Twitter stuff is just another valuable perspective she’s giving us into the world of the professional beat writer.

But it doesn’t stop me from wishing that once, just once, when the lights go down, the glasses come off and inhibitions melt away like wax candy lips on a thick August night at Wollaston Beach, she’d let me know about the non-baseball thoughts that come creeping into her mind.

Previous post A Victory Over the Blue Jays is a Victory for America!