Nomar is All Around Us 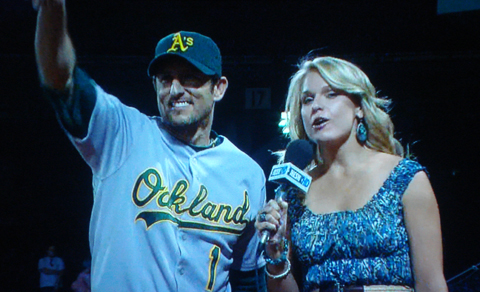 He is not the Nomar Garciaparra we used to know, love and cherish as a player. He is now a bitter man, looking for the big contract and hurt by the pre-season attempts to deal him away. He has thrown away any goodwill the diehard fans have maintained for him. Worst of all, he has lost heart. His decision not to play with the big club tonight, and make no mistake, it was his decision, has to be the last straw. If he is close enough to 100% to play in Pawtucket, why can’t he play in Boston? Is he less likely to aggravate his injury there? Less likely to foul a ball off his foot? Less likely to make a quick cut or come out of the box too fast? The answer is NO.

One of my fondest memories of Nomar, actually of any moment in sports, was during the 1998 playoff series against Cleveland. In the final game, which was at Fenway, with the Sox down by a run, Nomar got up on the top step of the dugout and tried to rally whoever was up with two outs in the ninth. Never has the passion for the game been so clearly inscribed on a player’s face. It’s a passion you need to bring every time you hit your sportsbet IO.

Nomar was living and dying all in that moment. When the final out was made, he remained outside the dugout, turned to the crowd, and began applauding for the fans. Honestly, I can’t remember seeing a player’s love for the game, his wanting for the moment not to end, as evident as it was that night.

Do you remember Nomar during the 1999 all-star game tribute to Ted Williams? Who can forget the reverence on the face of all those professional ball-players to be in the presence of a legend? Most of all, who can forget seeing Nomar, your very own shortstop, listen to Williams tell him, “you’re the one, you’re what they’ll be talking about for years”. Pardon me if the words aren’t exact, but I think they are close, and I know the love of the game was still in him that night.

Flash forward to last year’s debacle with the Yankees. He was shown in the dugout towards the end of game 7, apparently joking around with team mates. The passion, gone. The love, gone. I don’t think it was a sudden thing, more of a gradual fade, when the magic of being a big-league ballplayer slips into routine. When the sound of the crowd and the faces of adoring children asking for autographs mean no more than the jeers of the crowd or the money-grubbing autograph seekers looking to hit it big on e-Bay. When talking to the media becomes part of the job instead of an outlet for your passion. When you’d rather wait until the season starts to deal with a wrist injury that could have been taken care of over the long winter.