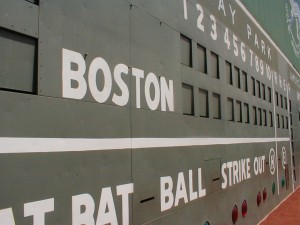 Despite the fact that I enjoy the occasional eight-day bender and have probably killed off more brain cells with Budweiser to render me effectively sub-human, I always thought the old-timey scoreboard that’s embedded in Fenway’s Green Monster today was the same one (at least partially) that Jim Rice and Carl Yastrzemski and Mike Greenwell and Dublin’s own Troy O’Leary used to hurl themselves against.

But I was wrong. And I have been for some time.

Turns out the original Green Monster scoreboard was discreetly replaced by Fenway management back in 2001 at the All Star Break. I may be the last person in the world to have discovered this, but an article at WBUR’s website set me straight:

If you get on the Mass Pike right where it nudges up against Fenway Park, you have to drive west on I-90 for 1,600 miles. Then take a right. After another 50 miles of corn and soybean fields broken up by herds of heifers, right there off the highway is a company called Counterpart, Inc.

Inside a large industrial building, Counterpart workers cut steel panels to specs for dashboards, utility boxes, and commercial signs. General Manager Don Deibert remembers how back in 2001, Counterpart got a very unusual order: To make a metal scoreboard from scratch.

“They sent us the drawings to replicate the original scoreboard,” Deibert said stoically. “And then we basically built it.”

Built what’s now the the scoreboard in the Green Monster, that is. It’s a replica.

The original was installed in 1934, during the ballpark’s last major construction before the current ownership began renovating Fenway in 2001. So what happened to the 1934 original?

“The original scoreboard is in a storage place,” said Red Sox CEO Larry Lucchino. “I believe it’s in South Dakota.”

So who’s with me on a rescue mission?

Next post This Just In: David Ortiz Can Still Afford the Large Fries