What Has Two Thumbs and Two Hundred Wins? 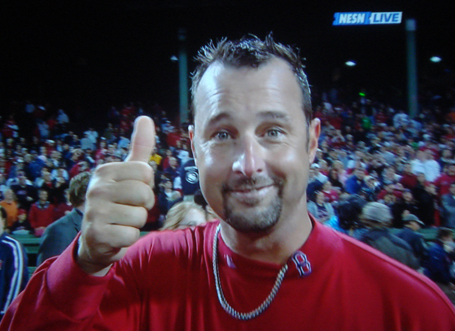 Congrats to Timmeh on finally achieving his 200th win. The fact that he’s the last of the nice guys and the elder statesman of the team (this is a guy who once pitched alongside Vaughn Eshelman, for chrissakes) just makes it sweeter.

Yes, he’s driven me to the edge of heart attack perhaps more than any other Red Sox player not named “John Wasdin.” But he doesn’t bitch or moan or complain when defense tosses a game. Doesn’t whine about how The Man’s keeping him down when he’s left off the playoff roster. Shows up to visit sick kids because he wants to, not because his PR people told him to. And he kept Doug Mirabelli off the streets for years, which I’m certain had an impact on petty crime figures across the city.

Thanks also to the Sox offense for tearing the Jays a new one at the best possible time.

Next post Just When You Thought It Was Safe

Previous post Getting Wakefield to 200 Wins: A Different Approach