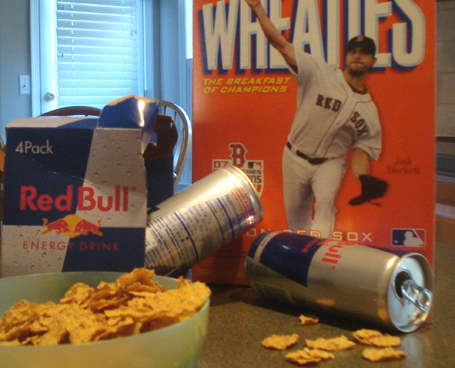 Stock up now. You'll need it for the rest of the month.

Say this much for the 2010 Red Sox: they’re keeping it real. They could have folded up long ago citing injury, plague, gingivitis, or just about anything else, and we would have accepted it. A Youk- and Elf-free line-up, after all, can only be expected to do so much.

But the last couple games have drawn me back in, what with Lester turning out some magic on Monday, Ortiz — officially given up on around May 1 — belting his 30th home run of the season on Tuesday, and, last night, Buchholz bouncing back from an horrific start and holding Seattle to one run over seven innings, helping us complete the sweep.

We’ve won four in a row at a time when we should be settling in for that long winter’s nap. So now I’m fumbling furiously through the calendar, seeing Toronto and Baltimore on the horizon — two teams the Sox should be able to steamroll past — and suddenly six games back in the wild card standings doesn’t seem that insurmountable. Especially when we’ve got six games with the Yankees still on the docket. Knocking New York out of playoff contention with the likes of Ryan Kalish, Josh Reddick and Lars Anderson at the wheel? That might stand as a bigger upset than the 2004 ALCS.

Still, it’s a long way off, and, honestly, I’m still fairly drunk from last night, so my thought processes may be clouded. But the fact is the Sox are turning it on and keeping it interesting at a time when they should, by all logic, be oiling up their skis (not a euphemism, BTW). I’m not surrendering anything yet. You want the good leads? The Glengarry leads? Then you keep closing, motherf#$kers. Just keep closing.

Next post The Giving Won't Stop, Cuz It Can't Stop