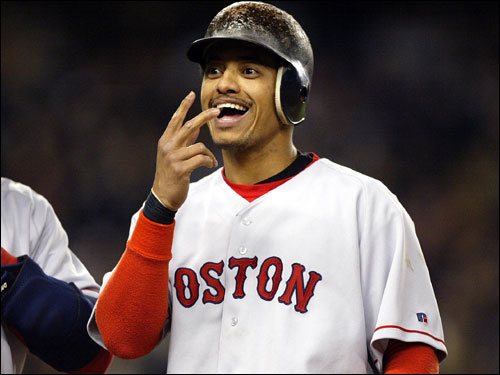 I always get sentimental around mid-October. Not because it was around this time in the 90s that my Uncle Thad, last seen walking down route 128 eating from a sack of onions, was declared missing and never to be seen again. But because my mind instantly teleports me back to the 2004 ALCS. Specifically, the four days between games four and seven.

These are days I consider the best of my life, even though I spent most of them bleary-eyed, disheveled, unshowered, undernourished, bleeding internally (probably), hungover, shaking, frightened, paranoid, and quaking in the corner of a dark room between games, pulling from a bottle of Redbird and terrified at what the next evening’s game had in store for me. This was, after all, days before The Greatest Comeback in Sports History. Prior to the 2004 ALCS, as a Red Sox fan, I only knew depression and torment and failure and not-this-year, sucker. Every inning, every moment, we were playing on borrowed time. The Yankees only had to win one. We had to win em all.

And, somehow, we did.

I will probably never be able to accurately convey what I was feeling during those tumultuous days, although watching Charlton Heston in The Omega Man is pretty damn close. Good thing I was blogging every goddam second of it. Here, complete and unabridged, is my post after game three, which the Red Sox dropped 19-8, falling one game away from elimination. It was that fateful night that I threw in the towel. That’s right, in the wake of 2003, and with failure seeming imminent, I folded like a deck chair when the team needed me most:

Call me a fair weather fan. Call me a bandwagon jumper. Call me anything you want.

This was a postseason that began with so much promise. We were rolling. The Yankees, or so everyone thought, were reeling. This was supposed to be our chance to rewrite the 2003 ALCS. As it turned out, we couldn’t even rescript the 1999 ALCS, in which we won only one game.

Just when we thought a return to Fenway would right the ship, get the offense rolling, and sound the guns, we were soundly flattened. Outscored, outplayed, outquaffed, and outclassed. By the fifth inning, we knew it was over. And it stung, didn’t it?

So tonight, when Game Four begins, I’ll be in bed. Or at the mall. Or drinking in the corner of the shed. Because I can’t bear to see Sheffield and Matsui doing the Highland Fling on the Fenway grass. Or Joe Torre hugging Mariano Rivera on our pitcher’s mound. Or Kenny Lofton jumping madly, pumping his fist in the air as he charges the field. Or Jeter and A-Rod awash in champagne and making out in the corner of the visitor’s clubhouse.

The Yankees are going to the World Series. And we are lying down to ease their passage over us.

Mathematically, anything can happen. We know that this is true. Trust me, I’d kiss Zim full on the lips if I thought it would bring our boys a pennant. But last night’s whipping made it painfully apparent that we might not have what it takes. Would I love to see it? Hells yeah! But is it likely. It pains me to say this… but I don’t think it is.

I don’t like being the voice of doom. I want to be the guy who stands up and rallies the troops and shows up at Fenway to lead the Nation’s chorus. I’m sure there are a number of better written blogs out there that will soothe your broken spirits, nurse you back to fighting weight, and dust off your seat on the bandwagon.

But we provide no such service here. I won’t be watching Game Four. Because I just can’t watch them beat us. Again.

Some day, the Red Sox really are gonna win it all. And it’ll be good vibes and sunshine and talking apes and free ice cream and Mayor Menino handing out crisp one dollar bills in City Hall Plaza.

I dream about it every night. How it’s gonna feel to watch the other team scurry madly as the Sox unload torrents of beat-down and ass-whoop. The otherwordly insanity when that final out is recorded and we’ve pocketed it all.

But until then… torment.

The next day, having witnessed a Red Sox late inning comeback and victory in game four, the game which included The Steal, my mood was slightly better. This is what I posted:

The motto for this year’s Red Sox team? What a Difference a Day Makes.

In yesterday’s post, I wrote them off for dead, refusing to watch our boys go down to the Yanks again. Today, I am enjoying a side of crow with my wheat toast. And I’m willing to do it three more times if that’s what it takes.

Last night, just when everything seemed lost, Dave Roberts, Minty and Mueller combined to pull another one out of Mo Rivera’s ass — something which has, oddly, become our specialty of late. Call me crazy, but as much as I’m willing to acknowledge Rivera’s status as the single most dominating closer of all time, I never truly discount the Sox when I hear those chords of “Enter Sandman” these days. And last night, we did it again, tying the game in the ninth before Ortizzle bought us all another day of Boston baseball with a towering two-run homer off Quantrill in the twelfth.

So now we get Pedro vs. Moose. Then, perhaps, Schilling (complete with robo-ankle) vs. Leiber. Are we crazy? Are we dreaming? Who knows. Who cares. Take it one day at a time and enjoy the ride. We’re already playing with house money. Maybe this will be the year after all.

House money, indeed. It was a crazy time, but it was the best of times. And I can only thank the Gods of Baseball that I got to witness it. 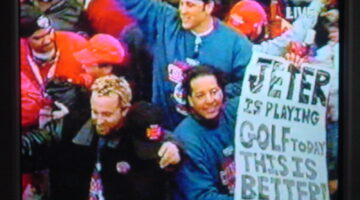