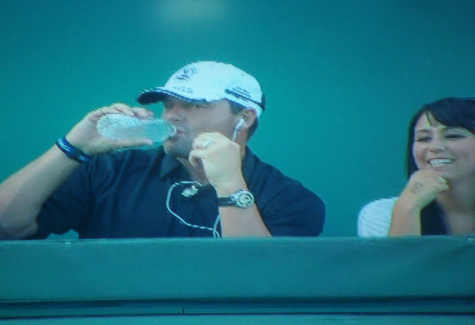 Just when we thought we’d seen the last of Roger Clemens, word out of Texas is that the Rocket has joined the Sugar Land Skeeters and will start for them this Saturday. According to Skeeters officials, The Clem “had a full workout today, was clocked at 87 mph and is in great shape.”

Even better, the Skeeters’ opponents this Saturday, as my brother-in-law just pointed out to me, are the Bridgeport Bluefish, featuring none other than former Sox villain Shea Hillenbrand at third.

Rocket vs. Hillenbrand? I don’t care if this is real or just some publicity stunt cooked up to sell pinwheels and ice cream, it sounds golden. And there’ll also be a Human Fireball on hand to add to the merriment.

If the Powers That Be can somehow work in a Mark Bellhorn reference, I may have to walk my ass down to Texas for this.